The UK’s small businesses are owed £50 billion in late payments, leaving many with terminal cash flow issues. We speak to suffering SMEs and the companies aiming to put power back into their hands

It is well-known that the majority of startups will fail and never become successful businesses in the long-term.

Almost two-thirds of new businesses will be dissolved within the first 36 months, with a fifth going under in year one – a hammer blow to the economy and employment landscape.

The reasons why may be complex, from poor access to talent to high barriers to entry and failure to respond to market forces. According to research from CBInsights, the single biggest reason for failure is a lack of market need for the product or service offered (42%), followed by simply running out of cash (29%).

“We had a project which finished in April and was invoiced in May – as we had to be set up as a supplier – then was still outstanding in August with very little communication from the client,” she reveals to BusinessCloud. “After several failed attempts to pay, I said I would have to consider posting the issue to my 22,000 followers on LinkedIn, which thankfully got things moving – and I was paid within a day.”

Walsh (below) describes the impact of this 85-day process as “crippling”. “Had I known I wouldn’t be paid, I would have made other financial arrangements – but for a couple of weeks I was told it was coming,” she confides.

“I had paid my team for this back in April, so it hurt my cash flow and meant I couldn’t pay other suppliers on time. Constantly waiting to get paid and then not affected my sleep and increased my stress levels.

“It didn’t feel great having to use those tactics to get paid, but I was left with no other option.” 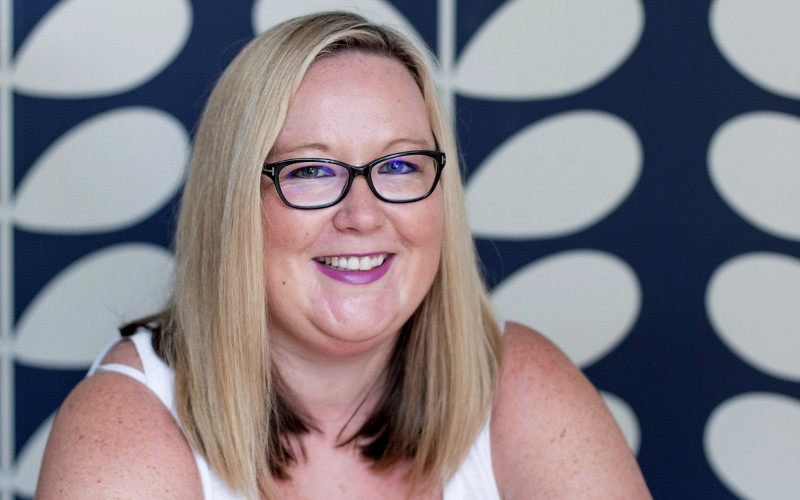 Another recent late payment meant she couldn’t pay her staff on time: “I felt sick… I couldn’t get hold of anyone to chase the invoice, which was even more frustrating. I had no idea if, or when, it would ever come.”

Jo Gibson (below) of BankiFi – recently voted into sixth position on our FinTech 50 innovation ranking – is unequivocal on the impact of late payments. 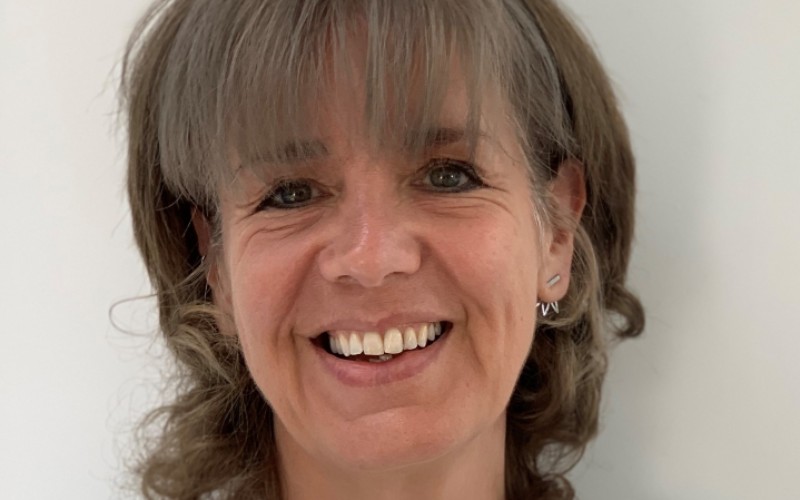 Lynne Darcey Quigley, founder and CEO of Know-it – like BankiFi, a FinTech looking to combat this silent killer of small businesses – puts the overdue figure owed to businesses at more than £50 billion.

BankiFi specialises in payment processing and financial administration services for SMEs, including accounting, invoicing and payments. Already working with the Co-operative Bank – with further global clients soon to be announced – it aims to embed banks within their customers’ daily workflows while also providing a standalone app, Incomeing, for use by customers of any bank.

It is the Manchester-based company’s way of “giving something back to the nation’s SMEs”, says Gibson, who leads on this co-branded bank channel.

“With the rise of FinTechs, traditional banks are in serious danger of just becoming a place where you store your money: BankiFi very much wants to help banks put themselves back at the heart of business. We want to help banks deliver all these third party services themselves.

“But we saw that there was equally an opportunity to take that service straight to the SME with Incomeing.”

She adds: “I wouldn’t dream of doing my supermarket shopping, getting to the checkout with the loaded trolley and saying, ‘I’ll pay you later’. So why do we believe that it’s okay not to pay our plumbers, our suppliers, our website designers?

“Every single business which I’ve spoken to which raises invoices is having the experience of being paid late or not being paid and having to chase, and most of them really feel uncomfortable. They’re doing their financial admin at night, at weekends, when they should be out with the kids or eating their tea.

“The follow-up is stressful for them. We feel really uncomfortable being paid the money we’re owed.”

The platform takes advantage of open banking request-to-pay technology to equip SMEs with a tool for instant payment. “Take a typical tradesperson: they could do their invoicing whilst they’re still at their clients’ premises,” explains Gibson. “We make the facility for payment so easy that they have no excuse to not pay you there and then. The chances are that you’ll actually have the money in your bank account before you get in your car.”

Incomeing also links into major accounting packages to make invoice creation and reconciliation seamless. “You can send it to your customer via email, SMS or QR code,” says Gibson.

“All they have to do is open the request, which then takes them to their bank; they see some details; they hit pay; and you get the money instantly. It’s all about putting the money back into the hands of the SME. 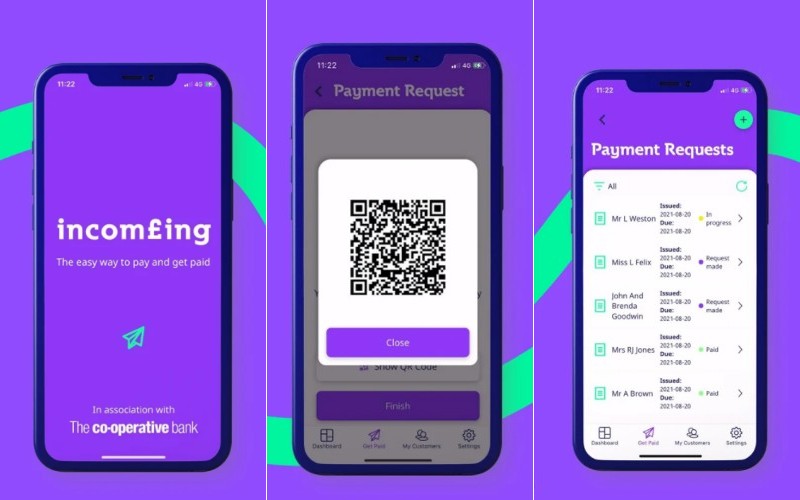 “The financial community’s answer to the SME having no cash flow is to provide them with more debt, more credit, more buy now, pay later… that’s not the answer. If we just pay small businesses what we owe them and on time, their reliance on everything else will diminish.”

Paul Cooper founded Lean on Me Training in 2020. The micro business, which delivers mental health training to clients including Dixons Carphone Warehouse, recently began using the Incomeing app. “I was looking for optimum ways of operating which enabled me to deliver the thing that I did best – the training,” says Cooper.

“Businesses have always struggled with cash flow, invoicing and debt collection. Initially, I just took that on the chin, thinking it was part of the territory.”

Cooper (below) previously had a successful 30-year business career, including executive, non-exec and project management roles for the likes of tech giant IBM, Atos and FTSE 250 firm Interserve. He also worked in banking technology, specifically electronic point of sale and electronic transfers.

“Unpaid invoices are an absolutely huge headache for SMEs. If you get one or two large clients who take longer than they should, or you haven’t quite mastered the art of cash in versus cash out, then that can kill you,” he says.

“When I discovered Incomeing, it was brilliant for me. It’s fast, efficient and worry-free. I don’t have to worry about keeping on top of chasing non-payment: you can set reminders and the money just comes in.”

Glasgow-based Know-it is a cloud-based platform which streamlines the credit control process so businesses can credit check, monitor, chase for payment and collect overdue unpaid invoices from one place.

The platform was launched recently by Darcey Quigley, the founder and long-term MD of professional debt recovery firm Darcey Quigley & Co. “Two years ago we decided we would digitalise the process of credit control,” she tells BusinessCloud.

“Many of our customers didn’t really know who their customers were: they supplied a service and expected to be paid – only to find when they asked for payment there was a major problem, such as the client facing liquidation.”

Darcey Quigley (below) is aiming to “level the playing field and give the SME a little bit of power back” with a platform which took two years to develop.

“Medium and large businesses would use Experian, do a credit check application form, pull references; but small businesses typically don’t behave like that as they don’t have the resource or time. They’re often very driven to just get the deal and the work done.

“With Know-it you know all about your customers; their credit journey; any changes that occur; and you can chase them. And if all else fails, you have a debt recovery partner at the back end of the process you can use and trust.

“There’s a taboo around chasing money. But it can wipe out your business.”

The credit reports and monitoring info is collected via APIs from reliable sources such as Graydon, Companies House and The Gazette. The platform links into accounting packages QuickBooks and FreeAgent, with Sage and Xero to follow.

Darcey Quigley, who recently welcomed former RBS executive Gordon Merrylees on board as chief commercial officer, says she is in talks with several big banks and other leading players in the financial industry about potentially whitelabelling the app. It also aims to follow BankiFi in expanding into Australia and New Zealand in the next two years.

BankiFi’s Gibson was part of an MBO at direct debit solutions firm First Capital Cashflow and subsequently served as operations director before exiting in 2017. She then worked within NASDAQ-listed acquiring business Bottomline Technologies for three years before joining BankiFi.

“SME leaders are the ops; digital marketing; accounts; the cleaner. They’re doing everything,” she says. “They spend more time raising new invoices and getting them out – rather than chasing outstanding ones – because they feel that’s what’s helping them grow their business.

“We’re excited to work with banks who want to support businesses on their growth journey as well as mortgages and loans.”