Is LFH here to stay? Meet Tapestry, an ’emergency service’ during COVID-19

Jenny Brookfield looks at the tech businesses that have enabled learning from home to happen – and asks whether some of the new ways of learning will hang around. No.1: Tapestry

Jenny Brookfield looks at the tech businesses that have enabled learning from home to happen – and asks whether some of the new ways of learning will hang around. No.1: Tapestry

Learning journal app Tapestry had to react like an “emergency service” when schools closed their doors in March 2020.

The platform, based in Lewes, East Sussex, had, until then, provided a place for schools and nurseries to share classwork with parents. On Monday, March 23, traffic on the app was up by 30% above their previous busiest day – and growing.

“It was completely bonkers, but a really exciting time,” says Steve Edwards, who co-founded EdTech company Foundation Stage Forum, which makes Tapestry, with his wife, Dr Helen Edwards. “We could see that we were suddenly providing something essential.”

January 2021 provided a need for a similar emergency reaction. When schools reopened after Christmas on Monday January 4th then promptly closed their doors again, teachers were suddenly expected to pivot back to online education. 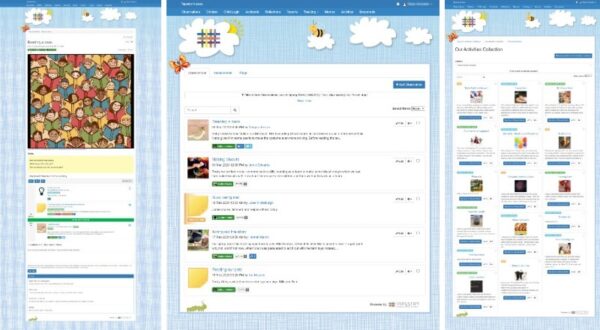 “Our servers nearly exploded, and the app actually went down for a lot of people for two hours because of the sheer volume of use,” says Helen. “Teachers who hadn’t used a lot of the functions of Tapestry suddenly needed more and they needed tech support – we had 700 support tickets coming in every day where we were previously used to receiving 80.”

Monday January 11th saw 250,000 videos uploaded to the servers, another landmark day for the business. “As a teacher myself, I could see a lot of teachers panicking when the system went down, knowing they had a legal need to send work home for students – that was probably the worst day for us,” says Helen.

The couple founded the business in 2012. Steve is a technologist who has worked for Ericsson and Helen is an early years practitioner whose most previous job was managing a nursery.

The initial aim of the business was to provide a link between home and nursery/reception class for parents who wanted to know what their children had been up to during the day.

The more Tapestry was used, the more it became apparent that it would be useful for older pupils too. Special schools got on board as many of their pupils arrived by taxi without their parents, and today it is used in more than 40 countries, with more than 18,000 accounts on the system.

One million parent and child journals are looked after by Tapestry and there are 200,000 teachers using it.

When lockdown and home–schooling arrived, the business knew it had to step up: the team already had a lengthy to-do list of features they knew they wanted to add at some stage and it was time to bring some of these forward.

Tapestry’s chief engineer came up with four that would have the biggest impact for users. These included extending the maximum video length from three minutes to 10 minutes – “we’d heard from nursery teachers that they wanted to be able to read an entire story on video for their class, so we introduced this within a couple of days,” says Helen.

Older children were also given their own log-in details and able to upload their own photographs to enable the information to flow both ways.

Expanding Tapestry came at a price, but the business believed it should shoulder this burden. “The data is costing us a lot at the minute, but we didn’t want to pass that extra expense to schools, so we’re sucking it up – just about,” she adds.

Schools that previously only used Tapestry for their early years classes wanted to extend its use to the rest of their age groups, which presented other opportunities to grow what they offered. Tapestry now provides its own content to help time-strapped teachers written by its five educators, which it never did before. The business has also recruited five extra people in response to the pandemic to enable it to better support every school it works with.

Like many EdTech businesses, Tapestry, a sponsor of the All Party Parliamentary Group for Childcare and Early Education, has seen it as its duty to ensure children could learn from home during the past 12 months. It is currently paying £1m a year in hosting fees, although the couple say February was £60,000 up on previously.

What the year has seen is a shift in the relationships between home and school, enabled through tech. “Schools have found it valuable to have daily communication with parents and that should continue, but there can be issues in keeping that going in deprived areas where access to tech can be low,” says Steve. “That’s critical to sort out and it should be universal in the same way children have a right to get to school.”

There have other challenges for some educators, too, particularly within the nursery sector, which didn’t receive the same support. “We’ve had some heart–breaking conversations with nurseries who contacted us to say they could no longer afford to pay for Tapestry or asking us to save their data so that it would be there if they were able to open again further down the line,” says Helen.

Another shift will come through teacher training, they believe, with the days of teachers travelling to a take a training course in person perhaps numbered. Tapestry introduced a reflection section where teachers could communicate with each other, sharing peer observations and carrying out training, as well as introducing a weekly podcast on an issue around education.

There are opportunities to grow to support the education system, and the couple are encouraged by the way their 30-strong workforce reacted.

“We’ve thought of ourselves as an emergency service and that’s helped our support team through the difficult times because we knew we were doing something critical,” Steve says.