Tech leaders lift the lid on the challenge of recruitment

Some of the biggest names in the world of tech shared their experiences of trying to recruit in the most competitive jobs market ever known.

Senior figures from TalkTalk, AppLearn, Summize and Culture Shift spoke at an exclusive business breakfast entitled ‘The Great Renegotiation – is HR director the hardest job in the world?’.

The business breakfast was organised by BusinessCloud in partnership with recruitment software and services expert Talos360, who shared the findings of a survey of more than 1,000 employees who have been actively seeking employment over the past 12 months.

The event was hosted at KPMG in Manchester and their partner Joanne Brien said it was the most competitive recruitment market she’d known in her 25-year career.

She said the pandemic had changed people’s approach to work and raised expectations of what they want from work and life in general.

She said while salary remains high on the priority list, having the right culture is also important.

Darragh Lee, Head of Talent Acquisition at TalkTalk has worked in recruitment for 18 years and described the current market as ‘wild’.

“It’s a candidate-led market – and this time it’s here to stay,” he said.

He added that although recruitment is cyclical by nature he believed changes following the pandemic would be permanent. 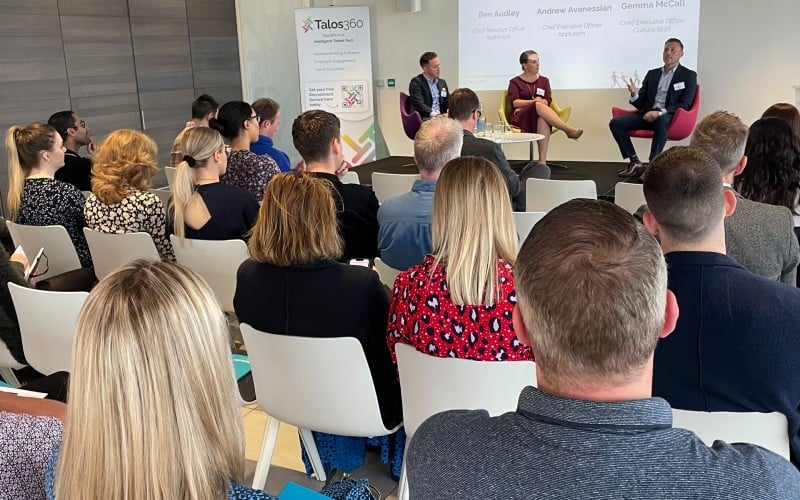 Ben Audley, chief revenue officer at Manchester startup Summize, said he’s aware of some people asking for a pay rise at the completion of their probation.

He added that for the first time in his career he’s seen candidates not turning up to a new job despite accepting a contract.

Audley said Summize’s big sell was the opportunity of joining an exciting startup and sharing in the future success.

“The analogy I use is you can be as good as you want to be but you’ve got to be in the right vehicle to take you there,” he said. “The career opportunities at Summize are huge. We’re expanding into the US and that’s really exciting.”

Andrew Avanessian, CEO of AppLearn, said they target 25% staff referrals and pay up to £5,000 for successful referrals.

AppLearn reward staff with share options and other benefits but Avanessian predicted a ‘reset’ in the recruitment sector which he said was unsustainable.

Gemma McCall, CEO of Culture Shift, told the audience that employees were ‘voting with their feet’ by leaving businesses that didn’t provide a way to report bad behaviour.

She said ‘micro aggressions’ can take a heavy toll on the victims and stressed it was vital those responsible were made aware of the impact of their behaviour.

Dean McGlone, Chief Revenue Officer at Talos360, said it wasn’t unusual for basic salaries in sales roles to have doubled in two years.

He said 71% of people questioned in the Talos360 survey said earning more money was their main motivation for changing job, which was partly being driven by the growing cost of living crisis.

Other key findings of the survey included:

The event was opened by Talos360 CEO Janette Martin, who said that although recruitment had never been tougher, the company remained ‘super passionate’ about the sector.

She said: “Employers who stick to their tried and tested application processes and interviews risk missing out on the best talent now, as people just don’t have the time or patience.

“Organisations that refine their hiring practices are more likely to be able to attract and hold the attention of potential candidates, efficiently managing them through the recruitment process to hiring and onboarding.”

‘The Great Renegotiation’ is available here.