Reviewing ROXi – a TV app for streaming music or karaoke

Music streaming hardware start-up Electric Jukebox launched in its home UK market in 2016 before rebranding to ROXi in 2017. A portable entertainment console including a microphone – which we reviewed in 2020 – is still available. This review is for the app version of ROXi.

The ROXi app can be downloaded and accessed through Fire TV on the Amazon Firestick (reviewed here), Sky Q, Android TV, Google TV or Nvidia Shield.

You can arrange for a free microphone (£1 delivery charge) which can then be used with the app for free on a standard subscription, while a premium subscription is also available.

The microphone for the app looks more like a classic mic than the console version and does not incorporate radar technology for pointing at the screen to make menu selections. As clever as the ‘pointer’ was, it does not feel like a loss as you can simply use your Firestick or Sky remote to control the menus; you can also link via QR code to the ROXi app on your phone and make selections that way.

There are handy volume and echo level sliders on the mic’s large central band. It is charged via USB cable. As with the console version, a further mic can be purchased (also £29.99) for dueting with friends or family. 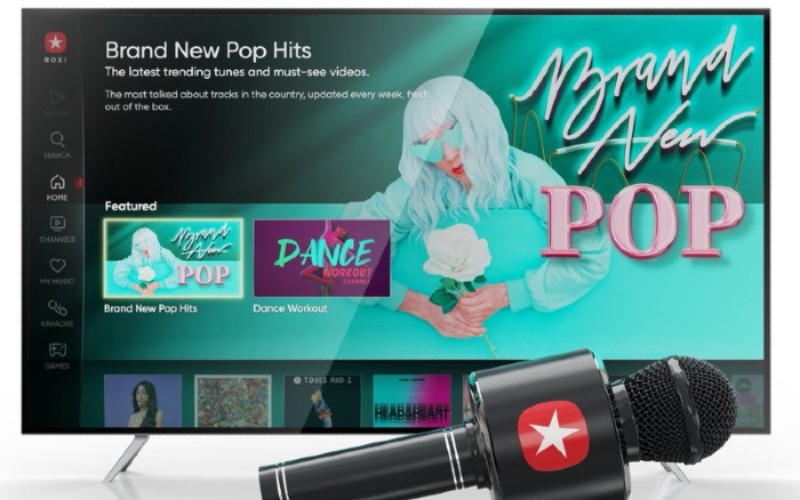 The platform has 70 million music releases for audio streaming. The big update with the third-party apps is the inclusion of official music videos.

Pre-configured playlists in the manner of Spotify – such as ‘Classic 90s’ or ‘Brand new hip-hop and grime’ – allow you to set the music going for an evening’s entertainment: it will play video after video, with the option of skipping to the next track with the press of a button. It is an attractive alternative to Spotify or YouTube Premium, if you pay for the premium version of ROXi.

There are also 90,000 karaoke songs available, which do not include the music videos: a handy bar counts down to the start of the singing, while the lines are highlighted as they are sung. Should you have slow WiFi, expect the timing to be out, however.

Kids and adults alike will love the trivia games, with subjects including music genres and decades, although most are only available on the premium subscription.

Many of the most popular videos and karaoke songs are also behind the premium subscription paywall. Personal playlists are also a premium extra, although you can favourite songs on the free version.

You can also listen to global radio stations or find specific music, such as relaxing sounds for meditation.

The ad-free premium subscription is £6.99 a month, which is more expensive than the £52 for the year on console. However the inclusion of videos – and easy accessibility via the integration with major platforms – justifies the price, which is cheaper than Spotify. Be aware that you cannot listen to music or watch videos on the ROXi phone app, however – its purpose is to control the TV menu.