Is LFH here to stay? Tassomai founder: EdTech had a duty to step up during pandemic

Jenny Brookfield looks at the tech businesses that have enabled learning from home to happen – and asks whether some of the new ways of learning will hang around. No.2: Tassomai

Jenny Brookfield looks at the tech businesses that have enabled learning from home to happen – and asks whether some of the new ways of learning will hang around. No.2: Tassomai

During COVID-19, founder Murray Morrison has been offering eight hours of free tutoring to pupils struggling with home schooling via his intelligent learning platform, Tassomai.

The on-screen one-to-ones with the London-based chief executive last 15 minutes per child and have been fully booked so far.

The former teacher believes EdTech is key to making a positive impact on children’s learning and, as part of the EdTech Evidence Group, which brings together leading UK EdTech companies, is passionate about raising standards rather than making money.

When lockdown one began, they offered the platform for free, with existing schools also extending its use to other year groups – a massive undertaking, but one Morrison says was their duty to carry out.

“We work in partnership with schools and the education sector,” he says. “There aren’t many companies in this field that are out to make a ton of money, that’s not what drives us.” 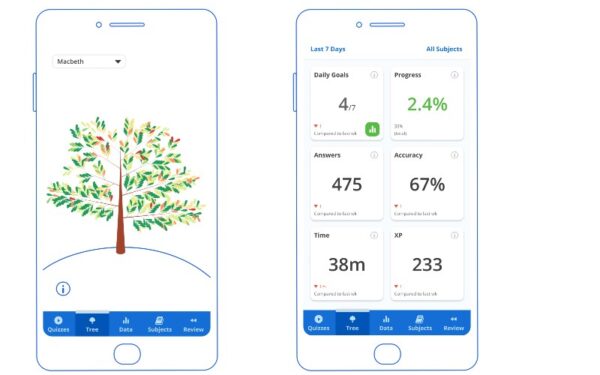 The business took on extra support staff to move schools onto the system, which involves a bespoke set-up for each organisation, and developed some tech solutions to automate and speed up the platform.

“We used to get a couple of dozen set-ups a week and we suddenly had 500 to do in a week or two, and there was no revenue involved, but we weren’t trying to make money out of this crisis – we were just trying to help schools,” Morrison says.

The platform, which is used by more than 500 schools on a subscription service or offered on a private subscription, works using gamification techniques to aid learning, with intelligent algorithms earmarking where gaps in learning exist. Teachers then have a detailed picture of where students are struggling so they know what to focus on in class.

Is LFH here to stay? Meet Tapestry, an ’emergency service’ during COVID-19

The business, founded six years ago, has always reinvested into developing its products but Morrison says 2020 brought some difficult financial decisions to enable it to continue to offer the service to schools at such a time of uncertainty. Its strategy to introduce particular new assessments, products and services changed, with a need to develop other areas instead.

One addition was an image of a tree for each student, with the colour and look of the leaves and branches providing an instant visualisation of where they are up to with their learning. Students and parents can immediately see a weak looking branch, and therefore focus more on those topics through the app’s quizzes.

Morrison says the development has aided the role of parents, millions of which found themselves as supply teachers during 2020 and 2021. “Parents often say they don’t know a particular area of maths, for example, so how can they help their child, but helping your child isn’t about having the right answers but the right questions,” he says.

“The tree allows them to see where they’re struggling and enables them to look together to see how they can learn more about that particular topic.”

The other addition was the one-to-one tutoring via video call. With Morrison able to see a child’s tree, the 15 minutes of tutoring offered is focused on the exact subject area they’re struggling with.

“As a business this is something we think could be really big,” he says. “My issue in the past has been that private tuition can be a waste of money, because who is diagnosing what that child needs and who is measuring whether that lesson has been useful?

“Schools can now use our tree to direct their tutoring budget more effectively and that’s something we’re thinking about offering long-term.”

For Morrison, having spent years building the tech products his business offers, it has been good to get back to teaching, with the contact with pupils also giving him insight into what Tassomai should be providing.

He believes the future will see schools placing more emphasis on technology, with the past 12 months having proven its worth.

“Kids are getting back into the classroom having missed so much and schools have a big job ahead of them in working out the extent of learning loss and progression, so I think we’re going to see massive growth in schools wanting our programme,” he says, adding that the EEG is working to curate a list of EdTech platforms that provide evidence-led education to schools and raise standards.

The business’s 20-strong workforce is mainly based in London, though a data analyst is now based in Singapore after returning home during the pandemic and is he about to recruit for a role that has attracted candidates from Leeds, Cornwall and Newcastle.

Tassomai itself works with schools to ensure it offers what they need. Since introducing English literature provision, it has added all the core texts needed for GCSE level, but Morrison adds: “If one school wants to have Othello for GCSE level we’d write that content in, even though we wouldn’t see much return on investment.

“We invest in Tassomai to make it the best product out there to help our partners, that’s what motivates us.”