Hy-genie’s hygiene tech, now validated in a BMJ study, topped our innovation ranking thanks to amazing support from the children’s hospital

Hy-genie was a worthy winner of our MedTech 50 innovation ranking last year – and it is difficult to overstate the role played by Alder Hey Children’s Hospital in its progress.

The Liverpool-based startup has developed an IoT-powered hand sanitiser dispenser which tracks and records usage of sanitation stations across hospitals to prevent the spread of healthcare-associated infections.

Richard Cooke, former director of infection prevention and control at Alder Hey, came out of retirement in 2017 to found Hy-genie, which counts the hospital, Nova and Deepbridge Capital among its investors.

A newly published study in prestigious medical journal BMJ – co-authored by Cooke, Darren Powell, head of pathology at Alder Hey, and research associate Katie-Rose Cawthorne – highlights how the anonymised system led to an almost 15% increase in hand hygiene performance in the low-risk pathology department during a six-week intervention period, with no significant change in workload. 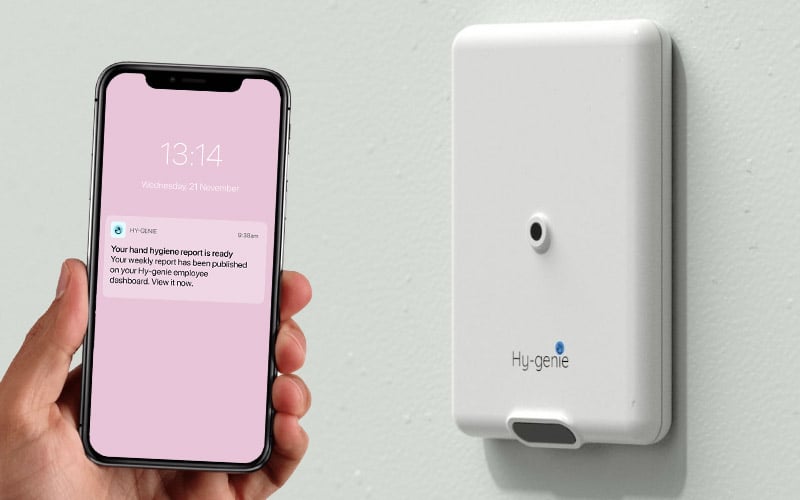 The study tracked 102 pathology staff working across five speciality disciplines in a confined department with little outside access.

“I can’t thank Alder Hey enough – without them, we would have had to mothball the company for two years. It’s as simple as that,” CEO Gavin Delaney says of the hospital’s willingness to pilot the technology during COVID-19.

“We were able to access secure areas of the hospital: whilst people were running around doing things which were far more important than dealing with us, they still found time to help us, which was amazing.”

The ‘lite’ version in the pathology study included just the first and last of these technologies.

“The key is to not alter behaviour, so people can work in exactly the same way: there’s nothing they have to switch on, switch off or charge,” explains Delaney.

“If we have a busier area that has, say, 100 people through it in a day [including visitors and workers from outside the department], maybe 30 of those people will be wearing our badges and we’ll be able to see how their progress tracks.

Don’t be afraid to test, test and test again

“We’re now trialling the technology in Alder Hey’s paediatric intensive care unit, which is obviously a much harsher environment: it’s given us huge logistical and political challenges because it’s a much more clinical environment.

“But we’re hoping that we’re able to show that there’s a greater than 15% increase when you start targeting it down to the individuals.”

He adds: “We’ve got very good support from the team. But the last thing you want to be doing in an environment like that is going around with screwdrivers and making noise.

“The children are receiving amazing care, but the families and staff there are clearly working under the sort of pressure that makes technology deadlines and setting up new companies pale into insignificance. So we are being very careful.”

Another pilot is expected to start this quarter in the Liverpool School of Tropical Medicine after Hy-genie secured ERDF funding to investigate the non-clinical benefits of the system.

“When we started mapping things, we could see which hand hygiene stations were being used and which were redundant,” he says. “You can see patterns of behaviour and flows through systems and buildings.

“If, for example, a soap or gel dispenser runs out in ICU, a nurse who’s dealing with a crash patient will go to another sink to wash her hands. She will then not have the time or a system to say ‘that one’s out of order, it needs refilling’.

“If there’s five millilitres of solvent dispensed with every use, we know that when it gets to a certain level it needs replenishing. We can automate that by email to central hotel services.

“At the end of the day, if something is available, people use it. If it’s not available, they may well not. It’s about correcting those missed opportunities.”