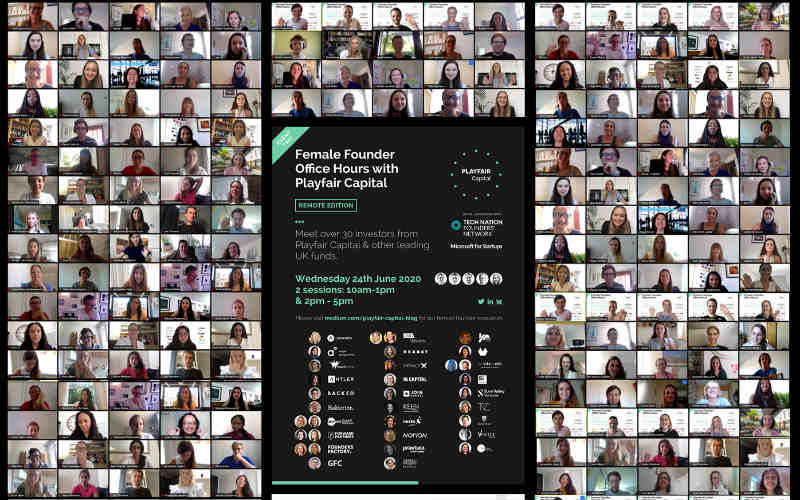 It’s no secret that female entrepreneurs face many barriers when seeking to start and grow a business.

The effect is exacerbated in the male-dominated tech arena. Indeed one successful entrepreneur told me last week how she was the only female member of her university’s computer society (and she was its president!)

It’s crazy to think that UK tech is allowing such talent to slip through its fingers. Speaking in general terms for a moment, studies have proven women’s greater talent for problem-solving and decision-making – two qualities absolutely central to entrepreneurship.

Henrik Wetter Sanchez, associate at Playfair Capital, told me there is a lack of access to investors, especially outside London, and also wider support for female founders in tech.

In response, in October 2019 the early-stage fund began its Female Founder Office Hours initiative to bring together 45 female founders and 11 investors at its Warner Yard base for pitching and advice. A second edition followed in February. The events were so popular that Playfair joined forces with Tech Nation to take the initiative nationwide and part-remote in June.

The aim, says Wetter Sanchez, was to render geography a “non-issue”. And he was glad they did, as the arrival of COVID-19 pushed them to go fully remote – and a second virtual event was added to cope with demand (you can read his Medium post on the initiative and what they learned from it here).

The two events, held on June 4th and June 24th, connected 200 female founders with 60 VCs across 800 one-on-one office hour meetings. I joined Playfair and Tech Nation for the second of these.

I was admitted to a Zoom Breakout Room to hear a fledgling entrepreneur pitch her touch-free instant payments app to an investor and potential mentor. The session, lasting a few minutes, was useful for both parties: the founder was given feedback on her pitch and asked probing questions, as you would expect in meeting a potential investor.

From there it was back to the event hub; a few words from the hosts; and on to the next pitch (each founder had four in total). All as slick as it would be in person.

There is nothing proprietary about the event, either. Playfair have not only brought in other leading VCs, such as Hambro Perks, but all 200+ applications were shared with every participating investor. It is also offering its ‘playbook’ to anybody in the ecosystem who wants to put on similar events for underrepresented founders: it has already supported events in the US (through Anthemis) and SE Asia (Cocoon) to take the movement global.

Lauren Nicholson, founders’ network lead at Tech Nation, said: “Female-led companies still only achieve 1p in every £1 invested in the UK and so Office Hour events like these are crucial to breaking down those barriers and creating opportunities for those teams to be supported by the investment ecosystem.

“We hope that this initiative will be a major step towards changing those statistics.”

What is even more impressive is that 37% of the founders identify as BAME.

Over the years we at BusinessCloud have sought to champion the role models blazing a trail for others to follow through lists and profiles which attracted tens of thousands of views and millions of social media impressions.

There is clearly an appetite for would-be female entrepreneurs to break through long-established barriers – and, with Playfair committing to running its event three times a year, this could be a crucial step in making it happen.