The investment has been made by Stonebridge, which is headed by DTC entrepreneur James Cox of Simba Sleep, Mahabis and Torque Brands.

The Manchester firm was founded by former personal trainer Adam Crofts alongside serial entrepreneur David Newns – one of the UK’s youngest-ever FTSE executives with two exits already under his belt – in April 2019. It plans to launch to consumers in Q4 this year.

CEO Crofts has built an elite team of experienced apparel designers, hardware developers, intellectual property experts and marketeers, whose CVs are furnished with stellar experience in both apparel and technology, from the like of GymShark, The Hut Group, VF Corporation, Lacoste, and Burberry, with others having designed for the 2016 Rio Olympics.

The smart sportswear company has a full-time, in-house IP department of five to protect a growing number of patents.

Claiming that its products have a comparable look and feel to luxury sportswear brands, Prevayl’s garments contain ‘invisible’ tech which connect them to an app which monitors performance and recovery.

At launch the fashion-forward brand will consist of three distinct elements; the sportswear, the hardware and the app, underscoring Croft’s vision to straddle the athleisure and tech industries.

“To secure £7.5m pre-revenue is testament to the whole team,” said Crofts. “Everyone is on the same page – the drive and ambition is palpable.

“Creating a global community and owning the connected clothing market hinges on cultivating genuine buzz and talkability, which ultimately relies on creating a product that not only knocks others out of the park, but also on the right infrastructure to scale at pace.

“Partnering with Stonebridge has undoubtedly been a leg up for the business. It’s providing us access to the Torque Brands eCommerce platform, which will accelerate our ability to scale, whilst offering our community a slick user experience – helping us fulfill our global ambitions.

“We are all really focused on igniting a new era of innovation that not only gets the blood flowing and puts the heartbeat back into the region’s rich textile heritage, but puts Prevayl on the map worldwide.”

How tech created by British dentists is fighting COVID

The new funding will be used to kit out state-of-the-art laboratories and fitness areas with data testing facilities, new hires, garment design, continued innovation and IP creation and developing an infrastructure that will facilitate growth.

Third party testing for Prevayl is provided by the University of Salford and Manchester Metropolitan University, while it has also been tested on fighter pilots.

It is also said to measure breathing state, time and type (thoracic/diaphragmatic), ventilatory threshold and minute volume, so it can recognise dysfunctional breathing and stress levels.

In addition, it measures core temperature, energy expenditure and hydration. Finally, it looks at IMU (inertial measurement unit) so it can understand acceleration, body position and activity classification between walking, running, cycling, HIIT, yoga and more.

Managing Partner at Stonebridge, James Cox said: “What the company has created over the last 24 months is quite amazing and sits right in the sweet spot of what we believe consumers want.

“The founders are world class and well on the way to disrupting another large global market and were delighted that we can be part of that journey with them.

“Prevayl is the perfect example of the type of company which we love to back.”

Prevayl’s launch collection will include a tank top, crop top and T-shirt retailing at around £90. 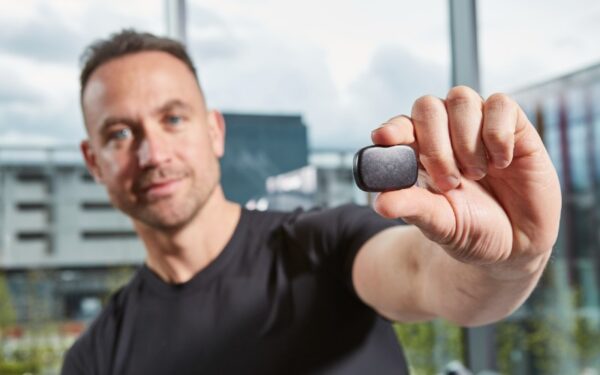 The sensors are connected by invisible stainless steel threads, surrounded by a yarn that expands with heat to keep them close to the body.

This is held in an internal panel that sits under the bra in the women’s crop top and around the chest in the men’s tank top, to pick up the ECG from the heartbeat and the breathing rate from the lungs.

Battery life is claimed to be around 24 hours.