Founded in Estonia in 2013 by Fred Krieger, Scoro has additional offices in Tallinn and New York.

The investment will fuel continued global expansion and is supported by new French and Spanish versions of the software.

Thousands of teams in more than 60 countries use Score software, which covers everything from projects and sales through to billing and reporting.

The funding round was led by Kennet Partners, with additional investors including Columbia Lake Partners, Inventure, Livonia Partners and Tera Ventures.

“Even before COVID-19 hit, most professional service businesses used as many as a dozen different platforms daily,” said Scoro’s founder and CEO Fred Krieger.

“However, teams now realise that constantly switching between tools harms productivity and results in lost data and duplicated work. In many ways, these tools became weapons of mass distraction.

“We’re proud to have the support of Kennet Partners and other investors as we help businesses identify and remove these weapons of mass distraction with our end-to-end work management software.” 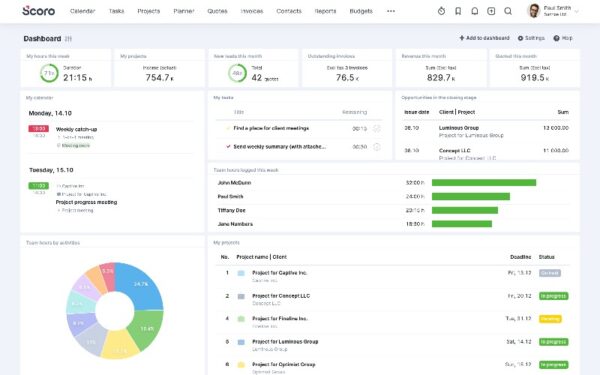 Scoro’s most recent product launch has been a modernisation of the Gantt chart, which had not evolved since its creation at the turn of the 19th Century. With the new funding, Scoro will continue to create innovative tools which enable professional service businesses to improve their productivity and profitability.

“The dramatic disruption to working practices caused by COVID-19 should give us pause for thought, challenge our assumptions, and encourage us to think about what the new normal should be,” said Dave Kellogg, a highly experienced SaaS advisor and new addition to Scoro’s board of directors.

“The evolution of the workplace will be supported by platforms such as Scoro which enable staff to communicate and collaborate effectively, flexibly and without distraction.”

Kennet Partners’ MD Hillel Zidel also joins the board of directors, alongside Kellogg. Martin Fincham continues to lead the board as Scoro’s chairman.

“It is a privilege to chair such a high calibre Board and very reassuring to be supported on our scale-up journey by some of Europe’s top B2B SaaS investors,” added Fincham.

Scoro now joins an elite group of start-ups founded in Estonia that have raised more than $20 million in venture capital. Estonia is the world leader in creating technology unicorns per capita, with successes including Skype, Transferwise, Bolt and Pipedrive.