The Information Commissioner’s Office is set for an overhaul to drive greater innovation and growth in the UK’s data sector and better protect the public from major data threats.

Planned reforms announced by Digital Secretary Oliver Dowden will see a new governance model, including an independent board and chief executive to mirror the governance structures of other regulators such as the Competition and Markets Authority, Financial Conduct Authority and Ofcom.

This follows the selection of John Edwards, currently serving as the New Zealand Privacy Commissioner, as the government’s preferred candidate for Information Commissioner when Elizabeth Denham leaves after more than five years in the role.

The government has launched a wide-ranging consultation on proposed changes to the UK’s data landscape. It claims the reforms will simplify data use by researchers and developers of AI and other cutting-edge technologies, secure the UK’s status as a global hub for free and responsible flow of personal data, and ensure that the ICO ‘remains a world-leading regulator’.

A recent example is researchers from Moorfields Eye Hospital and the University College London Institute of Ophthalmology making a breakthrough in patient care using AI technology.

The researchers successfully trained machine learning technology on thousands of historic de-personalised eye scans to identify signs of eye disease and recommend how patients should be referred for care.

This new way of using data has the potential to revolutionise the way professionals carry out eye tests. The government says its data reforms will provide clarity around the rules for the use of personal data for research purposes, laying the groundwork for more scientific and medical breakthroughs.

“Data is one of the most important resources in the world and we want our laws to be based on common sense, not box-ticking,” said Dowden.

“Now that we have left the EU, we have the freedom to create a new world-leading data regime that unleashes the power of data across the economy and society.

“These reforms will keep people’s data safe and secure, while ushering in a new golden age of growth and innovation right across the UK.” 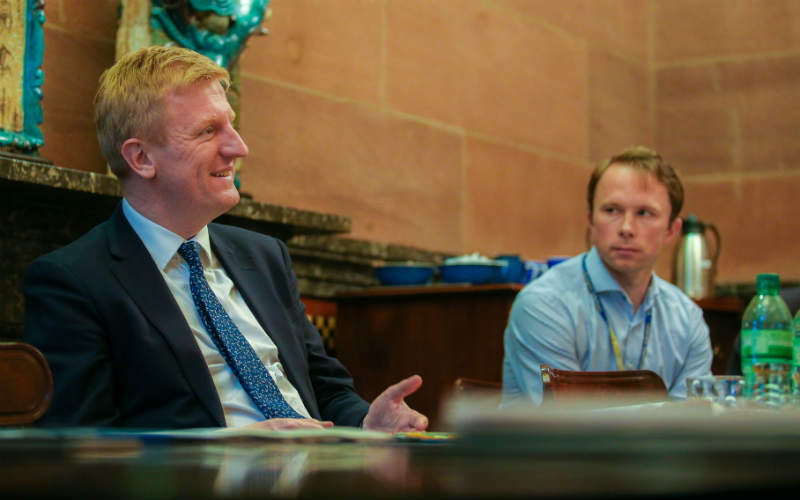 Oliver Dowden, left, with editor Jonathan Symcox during a 2018 roundtable

The consultation sets out plans to impose tougher penalties and fines for nuisance calls and text messages. These sanctions would be overseen by the ICO.

The ‘common sense’ approach referenced by Dowden means a small business such as a hairdresser’s would not face the same data protection processes as a multi-million-pound tech firm.

The government also said that with the rise of automated decision-making, it wants organisations to be confident that their AI-powered services are a force for good and will not inadvertently harm consumers through inherent bias.

“But these new routes must command the confidence and trust of the public.”

World-leading experts have also been appointed to the Centre for Data Ethics and Innovation’s refreshed advisory board. This includes Jack Clark, co-founder of Anthropic and former policy director at OpenAI, Dr Rumman Chowdhury, director of machine learning ethics, transparency and accountability at Twitter, Jessica Lennard, senior director of global data and AI initiatives at VISA, and James Plunkett, executive director of advice & advocacy at Citizens Advice.

Established in 2018, the CDEI will focus on enabling trustworthy use of data and AI in the real-world by working in partnership with organisations.

It is already working on some of the most pressing issues in the field, from helping the Ministry of Defence to develop ethical principles for the use of AI across the defence portfolio to partnering with the Centre for Connected and Autonomous Vehicles to embed ethical due diligence in the future regulatory framework for self-driving vehicles.

It is also helping the Department for Business, Energy and Industrial Strategy to develop the features of trustworthy smart data schemes, based on extending the experience of open banking to new sectors.