Defending your taste in music is usually a bit of fun over a pub table, but for those in the music industry these choices define fortune or failure.

Gratefully for the industry there’s never been such a supply of talent to put money behind. New music technology has created a generation of bedroom producers who can create albums indistinct from those created in a multi-million pound recording studio, and then put them up online.

But it’s the sheer volume of new acts which makes it difficult for the industry to find the next big thing among the thousand other acts that aren’t quite right.

That’s a problem being solved by two music-turned-tech entrepreneurs based in Ireland.

Zach Miller-Frankel studied Opera as an undergraduate but by his own admission said the qualification wasn’t opening many career doors, and so ‘fell in’ to band management.

His career led to him working for Grammy and Oscar-winning bands before breaking out on his own to launch Think Tank Music Management in New York.

After four years, and with expansion in mind, the American moved to Ireland and was impressed with the talent of its local music scene, but thought the local industry could do with some help.

“At the time, though not any more, [the music scene] was quite mismanaged. Artists which were really commercial weren’t being commercialised properly,” he said.

The opportunity, alongside a need to assuage his parents fears about his life thousands of miles from home, led him to start a Master of Business Administration at Trinity College Dublin.

It was here that he met his now co-founder Neil Dunne, who was working with and playing in bands, as well as orchestras while studying engineering.

“Fate had it that I met Zach at the right place and right time,” Dunne said.

The friendship became professional when the pair opened a branch of Miller-Frankel’s Think Tank Music in Dublin.

The goal was to build a roster of around six local artists by trawling social media, music streaming services, and going to gigs to find new commercial talent.

The pair also trawled through local databases of acts, added to by the bands and artists themselves.

Known as artists and repertoire (A&R), this talent scouting is typically carried out by a record label or music publishing company. It’s a process which involves following whole music scenes, listening to thousands of songs, and a level of serendipity.

But, said Dunne, “It was taking far too much time, it was completely ineffective and what’s to stop an artist saying they sound like Beyonce?

“Zach turned to me with a napkin he’d scribbled the idea for Andrson on and said why don’t we automate this process?”

Dunne, though initially doubtful, said the pair eventually created a workable prototype-  an answer to the music industry’s data-overload problem.

Typically the number of social media followers and song streams are considered when making a decision about who to sign, said Miller-Franke, but this data isn’t as reliable as it may first appear.

“Unfortunately TikTok is the place people are going to find new acts, which is ambismal,” he said.

He argues that these numbers don’t equate to longevity or ROI, which is of course bad for business. Until now, other data  – such as which artist objectively sounds like another already successful artist – simply wasn’t possible.

This is an efficiency in the music business which he said is sorely needed. He described receiving lists of hundreds of musicians a week, with no frame of reference for how they sound.

While the average person can distinguish one genre from another, and certain artists within the same genre, Miller-Frankel said he wanted to know what new artists sound like and if they’re available, automatically.

That’s where their start-up Andrson comes in. The platform provides a breakdown of the unsigned artists registered on the platform, with an assessment of how much they sound like already established acts.

Rather than this data being subjectively added by the co-founders or the artists themselves, these musical comparisons are deciphered by AI.

The technology to do this was built by Head of Audio Analysis Cárthach Ó Nuanáin, another Trinity College graduate and musician who was working at adaptive music generation platform Melodrive in Berlin as an AI Music Developer.

He was tapped up by the co-founders to see if it was possible.

“I didn’t think we could get him”, said Dunne, as the start-up was still relatively new. But as luck would have it Ó Nuanáin  wanted to move back to Ireland.

It was his expertise which brought the technology to the point it is as now, which Dunne said is one iteration from “becoming the global leader in audio similarity analysis”.

Dunne clarified that this is dissimilar from techniques used by the likes of Spotify to unearth new artists for consumers. 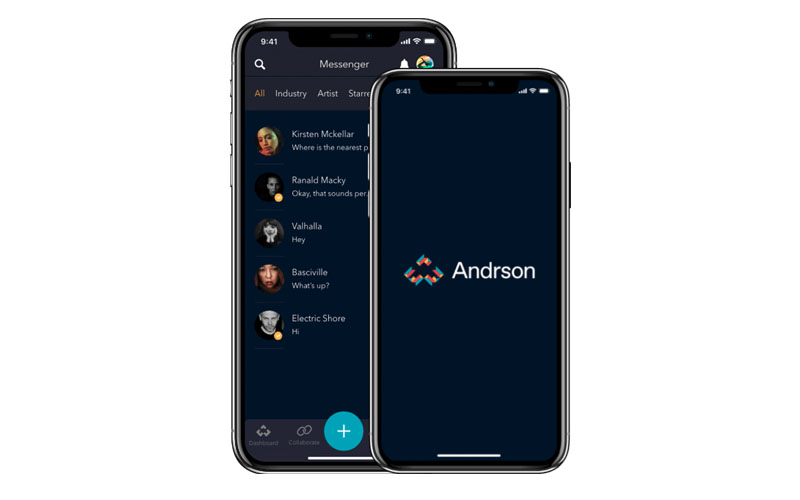 How the technology works

Where Spotify bases music discovery on other user’s listening habits, Andrson is designed to assess the characteristics of  the song itself, and how they compare to existing successes.

It compares the songs uploaded by unsigned artists on its platform to what the co-founders call ‘reference artists’ – the likes of Beyonce, Bruce Springsteen and even Tchaikovsky to a degree.

The technology isolates the elements of a song – key, tone, beats per minute, and spectral characteristics, and converts it into up to 1,000 data points.

“If a singer is mathematically 95% like Beyonce, firstly you can hear that. And because [the algorithm] is based on prior success, you know how to market her, the approximate marketing costs, the ROI, the longevity,” explained Miller-Frankel.

The technology “isn’t replacing human ears”, it’s designed to get users to the right artist faster by filtering genres and influences reliably and at scale.

Those users range from small management agencies across the US, UK and Ireland to major labels including Universal Music Ireland.

Its users also include music supervisors, who find music for use in television, film and advertisements, and touring agencies.

When the right artist or band is found, they can be contacted via the platform. Revenue comes from a £9.99 artist subscription, which the pair have waived for the remainder of the year in response to COVID, and a fee for industry professionals based on breadth of the search.

Dunne said the company has had calls from technology providers who are looking to licence the Andrson technology into their own software, which offers a new revenue stream.

The firm has opened its Series A of £5m, which is hopes to be complete by the end of the year, and in tandem is working on the next phase of the platform, which will include new features such as the addition of tour calendars and better analytics.

The funding is hoped to allow the firm’s tech lead to become its full-time CTO, and to add in-house developers to build out its technology.

Dunne said that the firm’s expansion from a core team of six could also see result in new tech products, both within and outside of the Andrson brand.

Since the platform’s launch in July, it has seen 5,000 artists sign up to the platform, a success which Miller-Frankel put down to their understanding of the music industry, rather than the technology.

“One of the biggest pitfalls in music tech, and start-ups in general, is trying to achieve too much with very little money. We’re focussed on making sure we do one thing very well, and that’s not replacing A&R or live music,” added Dunne.

The co-founder’s ultimate goal is an exit, said Miller-Frankel, but not before achieving a global presence and offices across the globe.

“We want every record label in the world to use our platform, and integrate with the tools that already exist rather than reinventing the wheel”.

The co-founders, who said they still consider themselves music entrepreneurs rather than tech entrepreneurs, said they have other ideas in the pipeline, hinting at ventures in the gaming industry and blockchain-based music royalty management.

Dunne said: “Andrson is the baby for right now. We’re staying firmly in the music industry for good, but we’ve always had other music tech ideas in the back of our brains and one day we’ll hopefully get to try and grow those as well”.