Fast-growing research company The Insights People has expanded into Indonesia, Japan, the Philippines and South Korea, meaning its tech platform is now available in 17 countries across five continents.

The Manchester-based company, which specialises in kids, parents and family market intelligence, has a client portfolio including global brands such as Amazon, Disney, Kraft, Warner Bros and the BBC.

Its latest expansion, following recent openings in Australia, China and India, enables the company to survey more than 362,000 kids and 170,000 parents a year through its tech platform. 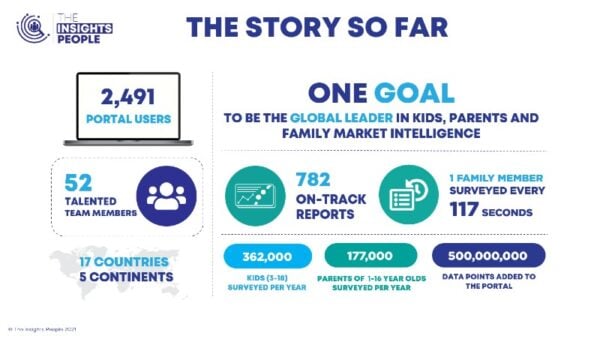 Founded in 2017, the company – which operates under the Kids Insights and Parents Insights brands – has also recently launched Media Mix Compass, a revolutionary media planning tool developed to help brands and agencies when planning, monitoring and evaluating campaigns.

“This represents an important development for us as a business, as we have experienced significant demand for our services in this region,” said founder and CEO Nick Richardson.

“Initially we will be running all of our Asia-Pacific operations from the UK initially, but we will be looking to launch an office in the region later this year.”

Data collection in the region started last month, so the first reports for both Kids Insights and Parents Insights will be due in May.

Speaking about its Manchester base, Richardson added: “It would be impossible to do what we do if we were based in any other city. The access we have to incredible tech, research, data science and commercial talent through the city’s universities cannot be underestimated.

“Our 52-strong, highly talented team is currently made up of 11 nationalities – which is a critical component to our success.”