The CEO of listed tech firm SysGroup says its new Manchester base is a unique opportunity to fill a void in the UK’s second largest tech city.

The managed IT services and cloud hosting provider is headquartered in Liverpool and has established bases in London, Newport and Telford in recent years, partly through a buy-and-build growth strategy.

Now it is looking to ‘shake up’ the Manchester market with a city centre base on the fifth floor of the prestigious 55 Spring Gardens building, which will become its northern sales and marketing hub.

“We’ve always avoided Manchester, given a few of our competitors are based there. However, some of those same companies are not the businesses that they once used to be and are starting to lose a lot of their best people as a result of the both commercial and cultural changes that have occurred,” boss Adam Binks tells BusinessCloud.

“The opportunity that we’ve spotted is the void for a culture-driven company in the Manchester scene – one which is personable in its business approach to both team members and customers alike. That is what SysGroup is all about and that is what we are going to capitalise on.

“We may be listed on the stock exchange, which sounds like a corporate culture to most, but alongside my leadership team, I’ve spent the last three years transforming SysGroup into an inclusive team-focused company with a fantastic culture.” 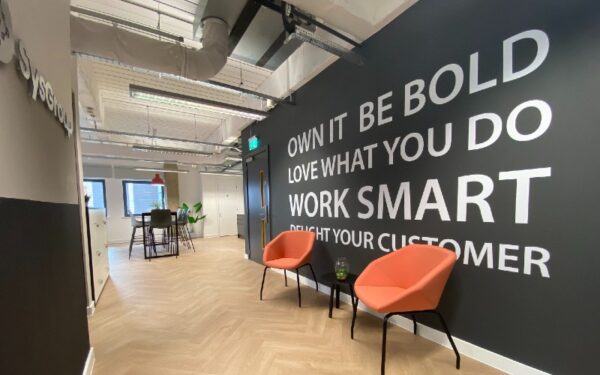 SysGroup, which is listed on the London Stock Exchange’s AIM market, increased its headcount during the pandemic to 127 – without furloughing any staff – and there are no plans to stop there, with access to talent in Manchester which is a key motivation for its move into the city.

“We’re looking to shake the market up by building a northern sales and marketing hub for SysGroup in Manchester,” explains Binks. “The reason we chose to do that there, rather than our headquarters in Liverpool, is because Manchester is well-known to be the second largest tech hub outside of London.

“Our competitors have bases in and around Manchester, so the access to talent makes it much easier for us to recruit.”

SysGroup has scaled significantly since Binks was appointed CEO in 2018, with an 86 per cent jump in revenue to around £19.5 million prior to lockdown. While the impact of the pandemic saw revenues for the last financial year decline by 7%, adjusted EBITDA was up 4% year-on-year to £2.91m.

As the UK’s emergence from COVID-19 continues, Binks believes there is a desire among many team members to return to the office as part of a hybrid working model. 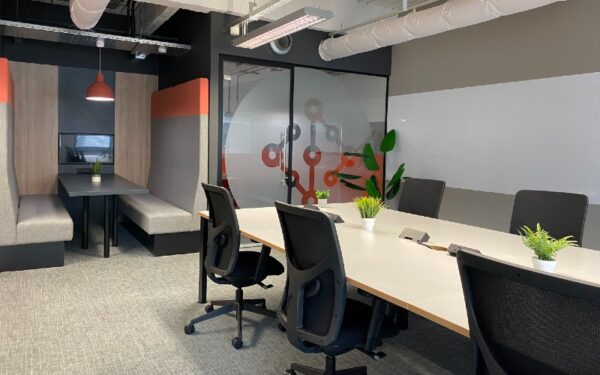 “Our new Manchester office has great access to transport links, including the two main train stations and the tram network. We’ve brought SysGroup into the heart of Manchester, into a space where people want to come to work,” he says.

“As we come out of the pandemic, we want to find our feet in what that hybrid work situation looks like. The younger demographic – people who are stuck at home alone, typically in apartments with no access to outdoor space – in particular want to go into the office for that social environment.”

More than 40% of the new Manchester office is dedicated to ‘chilled’ working spaces, in the style of other market-leading technology companies. 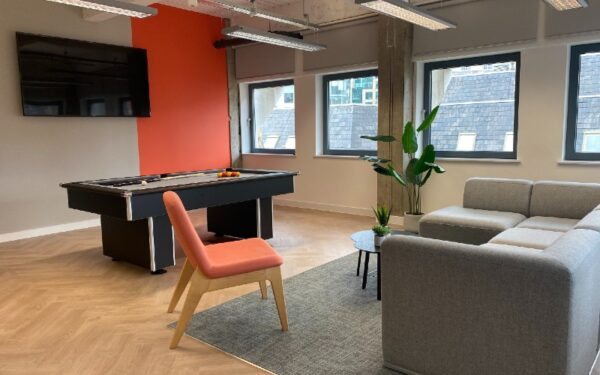 “The way we’ve built the office is what we call a ‘home from home’,” says Binks. “There’s a lounge area and a gaming space with a pool table and 75-inch TV.

“We’ve got meeting rooms, Zoom rooms – and then we’ve got the traditional sort of desks people can work from. You can sit on a sofa, connect to a big screen and share a presentation and collaborate with your colleagues.

“The rationale is that people will want to be in the office, to work and to socialise, because they’ve got the environment to do it.

“We’re a very culture-driven business – we’re all about working hard and playing harder. While we’re a PLC with lots of corporate governance around how we have to run the business to stay compliant with the regulation, we do a great job of keeping that stuff away from the wider team so they never become overwhelmed by it – we are a fun place to be.”

Newcastle base to create 100 jobs at tech consultancy Thoughtworks

The listed group boasts T.J. Morris – the parent company of fast-growing discount retailer Home Bargains – Admiral and Confused.com among its client base and has a current market capitalisation of around £18m.

Binks says he is planning further acquisitions as business ramps up again following the pandemic.

“Our plan is still to take the business to a £100m market cap,” he says. “It only takes two or three strategic acquisitions.

“We’ve certainly seen a delay to our aggressive acquisition strategy because of the pandemic, but that’s something which clearly can’t be helped… as we come out of the pandemic further, I think things will start to accelerate at pace again and I’m excited by the opportunities that sit ahead of us.”