Greater Manchester wants to be the ‘beating heart’ of the UK’s digital security industry.

That’s the message from Phil Swan, CIO and digital lead at Greater Manchester Combined Authority, at an event entitled ‘How can GM become a global cyber super hub?’
Organised by Manchester property company OBI and inward investment agency MIDAS, Swan hailed the arrival of GCHQ to Manchester as a game-changer.

He said Greater Manchester was a viable and affordable alternative to London.

“We’ll be going out to tender for a Cyber Innovation Centre,” he said. “It feels like it’s a really unique opportunity for the city region.

Rob Sedman, director of UKI Security at IBM said: “We see an area of expertise in Manchester for security. Like a lot of companies we go where the talent is. We have clients in Manchester. It’s a key site for us.”

Ian Welch is the COO of Call Sign, which has plans to build a Global Operations Centre in the Greater Manchester area.

“There’s a great wealth of talent,” he said. “GCHQ having an operation outside of Cheltenham is indicative of how digital security and cyber security is being looked at and looked upon by different organisations these days.”

Will Lewis, co-founder of OBI said the cyber security industry was a key growth industry for Greater Manchester.

“Since GCHQ’s decision to establish a significant Manchester presence, we have seen a clustering effect of cyber sector businesses taking space in the region,” he said. “Manchester has established itself as a leading European city for tech excellence and the cyber industry is the next exciting sector which is gaining momentum from the public and private sectors.”

Kevin Nicholas, senior partner at Capita, said Manchester was a very different proposition to Cheltenham, which is the main base for GCHQ.

“If you look at the talent base Manchester has a unique difference (to Cheltenham) because you have a far larger and far more diverse talent base,” he said. “In Manchester you’re going to have a far easier time attracting the 21 to mid 30-year-old group of people coming out of university or apprenticeships who want to work in a city like London. I’m predicting a pull away from London and Covid will accelerate that like crazy.” 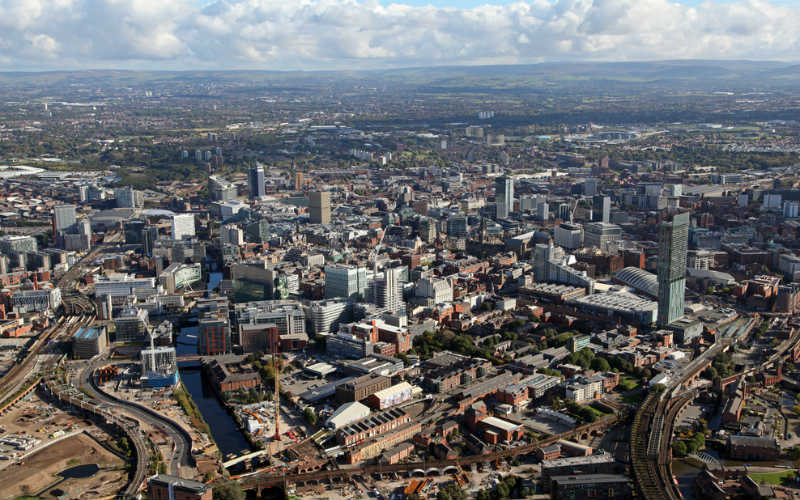 Mark Brannigan is the head of Cyber Solutions UK at AON and said the company had made a conscious decision to relocate some staff to Manchester because of their customers.

“When we look at the AON client portfolio over 90 per cent are not based in London,” he said. “There is a requirement across cyber risk, not just cyber security as a component, that you do need to be out in the regions. If you look at our incident response team you have to go on site where these data centres are for the big banks.

“Manchester is a major industrial hub and it does give us a presence outside of London and it’s something that we are actively looking to grow. There is talent in Manchester but fundamentally it’s a cost thing for us as well. Manchester is significantly cheaper than London. AON is never going to move out of London but we have to focus on putting our resources where our clients are.”

Paul Vlissidis is the technical director of NCC Group and there was no room for complacency in the competitive cyber industry.

“The talent pool is extraordinarily widespread,” he said. “Because of the scarcity of that talent we have to grab it. The GCHQ arrival is fantastic for Manchester. We should definitely capitalise on that and I’m sure it will have a significant effect on the talent pool and act as a magnet for talent to this area.

“I do worry that we’re a bit self-congratulatory. I actually think our start-up system here isn’t anything to compare with London in the way we can get investors in this area to invest in new start-ups.”

She chose to base her start-up in Manchester instead of London. “Manchester is cheap and London is not,” she said. “Manchester has some fantastic elements to it and I regularly recommend that the industry move here if they don’t want to be in London anymore. There’s a huge amount more we can do to support the wider ecosystem.”

Coplans said Manchester could do more to support start-ups beyond providing incubators. She said: “I have been in two and they’ve not incubated my company. They’ve given me cheap space to rent. I didn’t need cheap space to rent. We can work remotely. I would like to see much more support for small companies. How do I market? How do I sell? These are the things that I need support on.

The entrepreneur said the industry needed greater diversity in it. “We’re still 85 per cent white men,” she said. “We keep adding more barriers for entrants into this market. We need to be breaking them down.”

“We are giving real world work experience options to their cyber security and computer science undergraduates or even post grads because what the industry has told us is that when they graduate they’re not work-ready,” he said. “We deliver the opportunity to come and work with us.”

He said cyber security needs a slogan to raise awareness similar to other campaigns. “We need a ‘Clunk Click Every Trip’ or ‘Stop, Look, Listen’ slogan that helps people get cyber,” he said.

Ayaz Rathore is the founder of the group InfoSec Manchester and said it was vital would-be workers got relevant experience. “The question we asked right at the beginning is how does Manchester become a cyber hub?” he asked. “On an international level every city in the world wants to become a cyber hub. It’s brilliant that the likes of GCHQ and other organisations are coming into the city, creating employment but that employment has got to get some experience as well.”

Martin Tyley is the UK head of cyber security at KPMG and said growing the talent pool in Greater Manchester was key.

“We do have two centres in Manchester,” he said. “We have the one in St Peter’s Square and we’re in the Manchester Technology Centre as well with our digital team. We’ve managed to grow that second one really successfully to around 150 people over a three-year period but the attrition rate is not sustainable and that is one of the challenges we have.”

Chris Moore, cyber specialist at the Department of International Trade, said: “One of the stronger opportunities in Manchester is the ability to draw upon talent from a much broader region across the North West and Yorkshire.

Brian Higgins is the project manager at GM Cyber Foundry and said academia has a huge part to play but it was vital students got experience.

He said. “I don’t think people are work-ready when they come to a business. There’s an awful lot of cost then to that business to get these people up to par so they can be put to work.”

He said Manchester shouldn’t be competing with other cities to become a specialist cyber hub. “We should be collaborating with other areas,” he said. “If we’re going to do digital differently collaboration is key. If we collaborate with other regions that’s how we’ll make ourselves stand-out.”

Higgins added: “We have an opportunity here. We need to be dynamic. We need to build a reputation for the Greater Manchester and North West cyber community as a dynamic community.”

Holly Grace Williams is the managing director of first-generation penetration testing company Secarma. She said: “Do I think there’s a lot of growth potential in Manchester? Yes I do, which is why one of our teams is here. Manchester is not the only place. We have a team in Edinburgh for the same reason. To be a cyber hub one of the biggest things is the pipeline. We need to address the pipeline to get people into security. If we don’t we won’t fix the pipeline and won’t get people in jobs.”

Dekel Cohen is a senior product manager at Israel-based software company Radware and compared the situation in the UK to his own country. “Here in Israel the support that new companies are getting is tremendous,” he said. “The government will give you millions just to try out your ideas and will not take back any of that money if you don’t succeed. It’s a lot about the surrounding support for starting a new company. We are all about family. If you fail enough times you’ll succeed at least once. Don’t be afraid to fail.”

In Crypto: Why Bitcoin is plunging – and the dip will continue

In Crypto: Why Bitcoin is plunging – and the dip will continue