London is the largest city in western Europe and the world’s leading financial centre.

The canvas of listed buildings and tight streets is undoubtedly a difficult one upon which to outline smart city initiatives such as autonomous vehicles and fibre connectivity.

“How do we make a city that was built over the last 2,000 years a smarter city?” asks Theo Blackwell MBE, London’s first Chief Digital Officer, before the launch of London Tech Week today.

Appointed in 2017 to lead on London-wide digital transformation, data and smart city initiatives at City Hall, Blackwell joined from GovTech accelerator Public and helped regenerate King’s Cross as a long-standing Camden councillor with responsibility for technology.

Mayor of London Sadiq Khan, whom Blackwell describes as “’pro-technology and pro-innovation”, launched Smarter London Together in 2018, a roadmap to improving collaboration between the tech sector and the capital’s 33 boroughs, 40+ NHS Trusts and major universities, in order to feed advancements back into the public sector.

“This ‘fix the plumbing’ work we’ve been doing will help make London a more responsive place and a better place to do business,” he tells BusinessCloud. “We want to improve the citizen experience by embedding innovation where most people get their services: local government.

“Our city [of nine million people] is scheduled by the middle of the century to grow by additional two million – eight boroughs’ worth. What could apply to one borough could also apply to six, eight or 14 others.

“That kind of linkage between all of them wasn’t really happening before.” 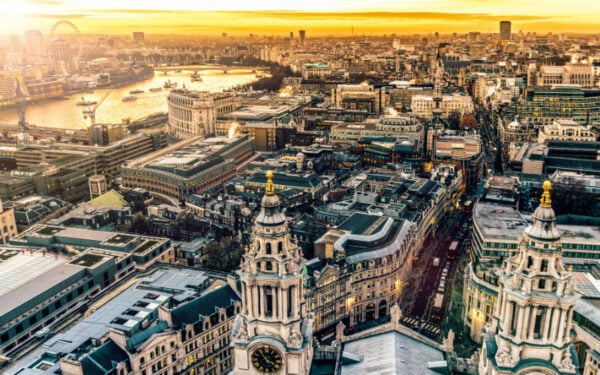 London: A mix of the old and the new

He says smart cities are often driven by an “overly solutionist” approach which involves “getting a big platform and feeding loads of data into it, and then doing something with it”.

Instead, Blackwell is taking on the best traditions of design and experience with data to do something which is more purpose–led.

The likes of the Oyster card, which he credits with the wider adoption of contactless tech, has built confidence in TfL as an innovator. The transport body has since provided Wi–Fi across the capital’s tube network, anonymising the resultant data to support analysis of underground passenger flows and enabling the pricing of advertising to raise revenue for the Tube system.

“It allowed us to price advertising on our estate in order to generate that extra investment,” he says.

London’s ‘copper legacy’ of wires, as Blackwell puts it, will also need to be completely replaced by fibre in preparation for the 5G revolution, and to speed up internet connections across the city. The Tube network is the perfect place to begin this update: Blackwell says 600 public buildings will be connected up to this fibre ‘spine’, also lowering the cost for private investment in outer London.

“Our pivot has been towards a digital transformation approach to smart cities, rather than how some people see it: drones and connected autonomous vehicles. Although we do have those too.”

The CDO keeps in close contact with leading US cities such as New York, San Francisco, Chicago and Los Angeles, regularly exchanging information around mobility, for example; however he looks closer to home for real smart city inspiration.

“I draw a lot of really good knowledge from European cities,” he says. “It’s not just about the amount of technology firms that you have: it’s about the kind of posture of the city and the quality of that relationship.

“Helsinki have a similar progressive direction to us, as does Amsterdam, Manchester, Leeds, Glasgow and Belfast. They really stand out.”

While London is considered the FinTech capital of the world, it is the city’s success with data which has allowed it to claim that title, says Blackwell. Data will also create the best outcomes for London’s inhabitants, rather than shiny new toys: “It’s not about the piece of kit, it’s about how you do things.”

Evidence of the change that big, open data can quietly make to the city is found in TfL’s network of 700 cameras. These collect data which is sent to the Turing Institute, the national institute for data science and artificial intelligence.

Via machine learning, the feeds from these cameras can be interpreted into measures of air-quality, and reports of how busy streets and pavements are. This data is then added to an open API which anyone can use to create apps and insight.

Blackwell says this particular project is on the cusp of 48-hour reporting, bringing faster insights about the city as a whole. “Someone can create an app saying ‘this is the healthiest route to take your child to school’; and it might change day by day, depending on the weather and traffic patterns,” he explains.

Blackwell says the technology could be used for resilience purposes during lockdown, measuring the economic activity of high streets as compared to a more normal year, and adherence to social distancing.

This type of data can give policy makers more ‘levers’ to decide where the likes of economic support would be best–placed.

“Moving away from traditional ways of doing things and using data can only come from good dialogue – and creating a sense of the ‘art of the possible’ when it comes to using the technology.”