A British satellite scaleup has raised £15 million funding to provide real-time data on how green every building on the planet is.

Satellite Vu’s Series A was led by listed space tech fund Seraphim Space Investment Trust and will be used to ramp up plans to launch seven thermal and infrared imaging satellites into space.

Its first satellite, due to be launched into orbit in October 2022, will collect real-time temperature data about the Earth’s built environment several times a day, allowing for key insights around energy efficiency and how individual buildings are being used and occupied.

By measuring the heat coming off a building, Satellite Vu will provide data that will be able to show if any individual building is being heated efficiently or which parts of a city are the worst emissions offenders.

This matters acutely when it comes to the built environment because the real estate industry is one of the largest contributors to climate change. It makes up 40% of global carbon emissions when accounting for construction and building performance. 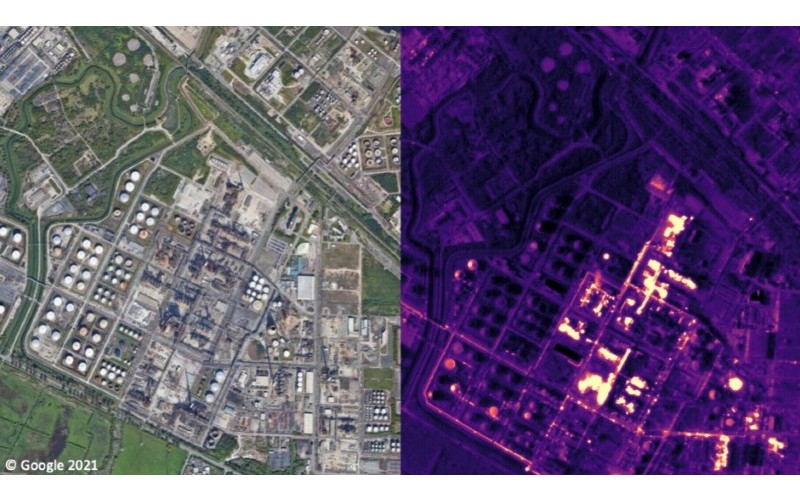 “With [climate change conference] COP26 just around the corner and Europe and parts of the USA having suffered the hottest summer on record, there is growing acceptance that we need to act now to try to mitigate the impacts of climate change on our everyday lives and economy,” said CEO Anthony Baker.

“But while many think of industries such as aviation as some of the least sustainable, the built environment is actually one of the primary polluters across our globe. But regular individual monitoring of these buildings is too expensive both in terms of time and cost, meaning much of the environmental and sustainable ratings are often years out of date.

“That’s simply not good enough when we clearly need to act now and means many are not aware of just how poorly a building is performing in terms of sustainably.

“Our groundbreaking use of infrared and thermal imaging technology on our satellites will mean that landlords, funders, insurers and governments and regulators will be able to access real-time information at an affordable cost that will provide them with a single source of truth on how sustainable a building really is meaning they can take steps to make that building more sustainable.

“This latest round of funding means we can look ahead to the launch of our first satellite in late 2022 and start the process of securing delivery slots for the remaining six.”

Satellite Vu has also been backed by the UK Space Agency through its National Space Innovation Programme to support the build of the infrared sensor for its first satellite.

The UK government recently launched a National Space Strategy aimed at advancing British space technology, which included measures to back businesses like Satellite Vu that help tackle global challenges such as climate change.