Autonomous ‘pods’ born in Coventry are now able to swarm together in a world first.

It moves the concept of a driverless public transport service, where the public can use an app to hail a pod or platoon of them, closer.

The pods created in Coventry by Aurrigo are designed for pedestrian areas and shared spaces, with the idea that they can be used as a ‘first and last mile service’.

WMG researchers at the University of Warwick integrated Swarm intelligence – skills typically used by birds and insects – into the pods in a project with Aurrigo and Milton Keynes Council.

Pods can now schedule themselves to follow each other, minimising the number of individual vehicle movements and the need for a supervisor per pod.

In the future, it is expected that a supervisor can watch several pods and report any unexpected behaviour.

The technology also enables the pods, working within a fleet, to automatically optimise their behaviour to meet future passenger demand by distributing themselves within a city to the areas where they will most likely be requested. 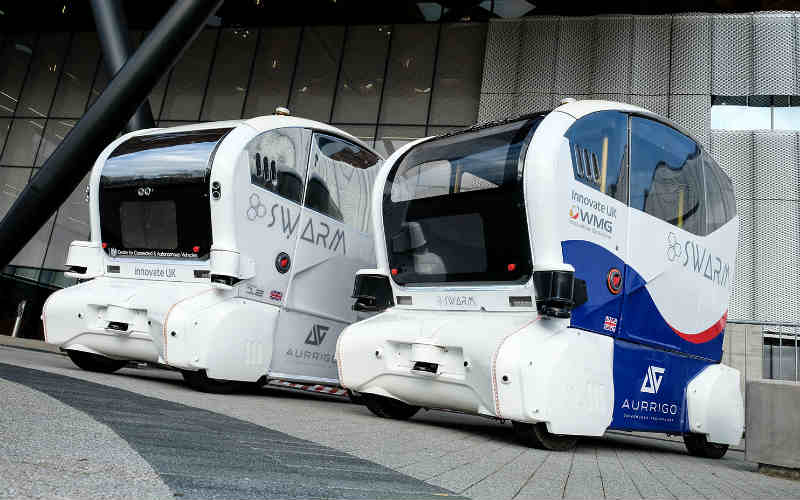 Dr Roger Woodman, associate Professor in human factors at WMG at the University of Warwick, said: “The SWARM algorithm has been tested and is proven to be effective and reliable.

“The ability to make pods ‘swarm’ together like a group of bees or birds, means they can coordinate with each other, bringing them one step closer to our streets.”

Simon Brewerton, Chief Technology Officer at Aurrigo, continued: “The collaborative SWARM algorithms have been developed to enable our autonomous vehicles to optimise their own trip schedules, so they deliver the optimum efficiency from a fleet of vehicles.

“The swarming technology is very exciting and has the potential to operate large fleets of remotely supervised autonomous vehicles in a safe and scalable way. Interest in this will be huge.”