Author, serial entrepreneur and ex-architect takes latest venture from the classroom to Zoom

A coding school for kids carried out its one-year online pivot plan in a matter of days after coronavirus hit the UK.

Founded by former architect Elizabeth Tweedale, Cypher offers themed coding camps for children aged 5 to 14. Before COVID-19, it taught students as part of the national curriculum via after-school clubs and holiday camps.

The firm had a one-year plan for taking these courses online – but the team pulled together to implement the plan in just a week.

“It was a process of necessity, but it turned out really well for us,” Tweedale tells BusinessCloud.

The firm runs themed classes: for example, by first studying how bees see, students are then taught to replicate what they have learned via code.

“It’s designed for helping to think about solving problems in their real world. The kids can understand that, by using technology, they make things unique and harness problem-solving,” she says.

Tweedale said the programme is designed to be inclusive of all students, not just the “nerdy, techy kid” that she was closer to as a child herself.

While at college in the US, she straddled two worlds, serving as president of both the cheerleading team and the computer science club. She was the only female in the latter organisation.

“We’d have cheerleading practice on a Tuesday and then pizza night with the guys. You know, ‘Two for Tuesday’,” she jokes. “All the girls on the cheerleading team would be like, ‘we can’t believe you’re gonna go and have a whole pizza now!’

“But it was great. It’s just sort of the two different sides… everybody has their own interests. If you can tap into those interests, then they just become people again. And it’s the same with coding.

“If you get a child that’s only interested in fashion, ask them ‘Do you want to create a fashion app?’ She might realise that coding is quite cool and she can do it. It’s not only for geeks.”

After gaining a Masters in architecture, she went on to work on the specialist geometry team of Foster + Partners on projects including Apple’s famous circular US headquarters.

Since moving to the UK with her Canadian husband 12 years ago, Tweedale had co-founded another coding school, Blue{shift}, and published six books on the topic of teaching children to code.

She and her husband also founded software company GoSpace AI, an eight-strong workspace management company which uses machine learning to efficiently allocate the optimal layout of office space between teams.

Tweedale is still the Chief Innovation Officer of the firm but has pulled back to concentrate on latest venture Cypher.

Founded in 2016, the firm was inspired by her experience as an architect. Tweedale said she found her colleagues didn’t have the foundations of computational thinking needed to learn new coding languages as efficiently as she understood them.

Cypher, then, was designed not to “create a generation of computer scientists doing crazy coding, but because we all need to understand the fundamentals of how technology works and harness it for what we need”.

The company has now taught over 1,000 children every year. Since its pivot in April, it has racked up 4,000 hours of virtual teaching with more than 350 kids.

Tweedale says the move to remote classes was at first challenging for its young students and their parents, with new software and passwords to remember. However the students are now comfortable in joining an online class on their own.

“The children that are fortunate enough to have computer and internet during this time have really jumped to a whole new level,” she says.

The online classes are currently 50% of the firm’s revenue, but Tweedale says over the next three years the majority of the firm’s income will be created from online courses as it moves into new markets including the US and Middle East.

However there is still great value in teachers being in the same room as their pupils. 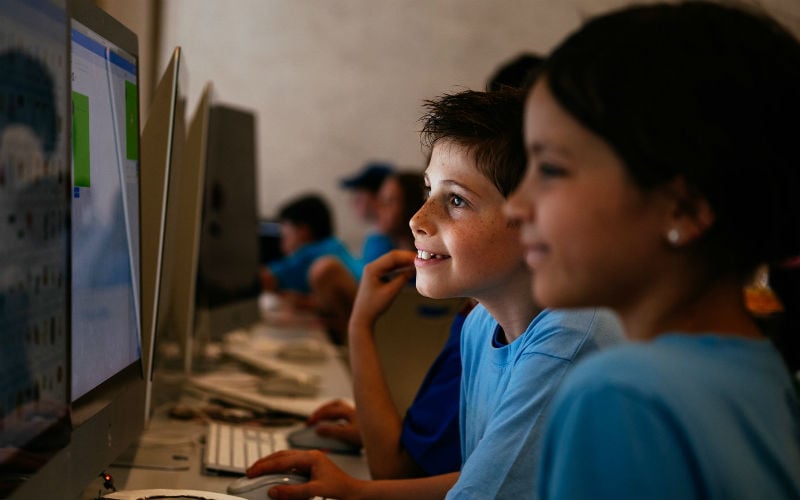 “If you start from just teaching people online you could miss a step in understanding how they process information,” she says.

The tutors it hires are typically young computer science MA students – coders first rather than teachers.

The training these new tutors receive is also being automated and moved online. There are currently around 30 of them working with the firm.

“There are so many challenges for training teachers for in-class teaching. When you translate that to having them teach online it seems so much simpler,” says Tweedale.

But new challenges emerge, such as how to engage a child who has decided to put their tutor on mute.

Female-led investors Adelpha Capital contributed a £250k seed round in 2019, followed by a £225k investment from a series of angels earlier this month.

On growth plans for the future, Tweedale said it would be possible to organically expand the company, but “every time we’ve had a capital injection, our revenue has also spiked and margins remained the same”.

She added: “We’ll definitely raise again in future, but now it’s about getting the initial traction for online nailed down.”