A trailblazing InsurTech has revolutionised the speed and ease with which flooded businesses receive pay-outs.

When flood waters hit a set level, a digital signal is sent instantly to FloodFlash, triggering payment of the agreed amount of cover.

This is in stark contrast to how conventional flood insurance works, where claims are based on the subjective measure of the amount of damage inflicted by the flood when it hits and over time as the waters recede.

These assessments require site visits by a claims assessor – someone looking to pay out as little as possible – and with whom it can take many months to reach agreement.

When Storm Ciara hit last year, FloodFlash set a new world record for speed of claims payment, with money in the flooded business’ bank account just 23 hours from when the water hit the required depth.

Then a few weeks ago, when Storm Christoph hit in the North West and the Midlands, the firm broke its own record with a claims payment in the insured firm’s bank account less than 10 hours from when the flood hit.

“At the start of the process, the client selects up to three trigger depths for the policy; then we ask how much money they would need if flooding reached each trigger depth,” co-founder Adam Rimmer explained to BusinessCloud.

“We attach our own Internet of Things sensor to the client’s property, which measures flood depths and sends the data to FloodFlash HQ via mobile networks.

“As soon as flood water reaches the client’s trigger depth, we validate the claim and pay the money they requested, usually within 48 hours.

“The latest test for our claims came during Storm Christoph in January, when we paid our fastest claim ever. It took just 9 hours and 44 minutes from the client flooding to the full pay-out arriving in their bank account – and this all happened fully remotely during a full lockdown.

“This is several orders of magnitude faster than the months it takes traditional insurance to pay this.” 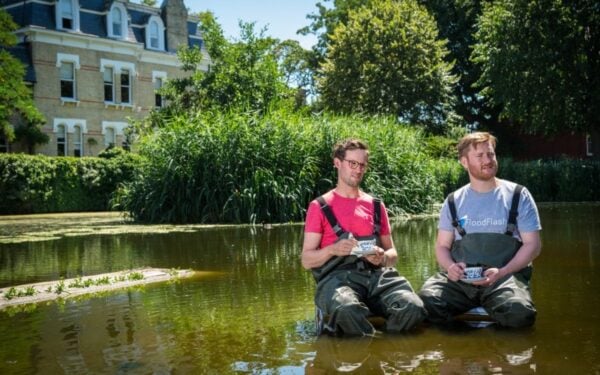 The businesses hit by the floods were already struggling financially through the impact of COVID-19 lockdown.

“Fast pay-outs that protect business cash flows are the biggest guarantee of survival for businesses that have been under huge financial pressure thanks to COVID. After all, what good is a pay-out three months later when the money goes to the liquidators?” said Rimmer.

Indeed, because FloodFlash works entirely remotely, with no need for a claims inspector to turn up to assess damage, claims payment carries on just as fast and efficiently even when lockdown rules prohibit travel or meetings.

“There are two sides to FloodFlash tech behind the scenes. The sensor is essentially the FloodFlash claims department: without it, there’s no way we’d be able to pay our claims as fast as we do,” explained co-founder Dr Ian Bartholomew.

“It’s a highly accurate depth-measurement device with internet connectivity and fail-safes. It’s self-sustaining and storm-proof so it can weather almost anything.

“The other half of FloodFlash tech is the cloud-based underwriting platform we use, which gives brokers and customers direct access to FloodFlash quotes. That means people can access parametric quotes easily, removing the need for a expensive cast of experts.”

Tired of WFH? Quirky workspaces you’ll want to visit in 2021

Dr Bartholomew is a doctor of glaciology whose pioneering study of weather underpins how the cost of a given level of protection at a given site is calculated. Rimmer, who met Dr Bartholomew at Cambridge University, said his co-founder’s background gives the firm an extra edge when it comes to modelling and measuring floods for clients compared to competitors.

“Our job is all about quantifying and reducing uncertainty,” said Dr Bartholomew. “Based on the evidence that we have, what is the realistic range of what might happen? Is there anything we can do to narrow it down?

“Understanding how a system works is crucial to this: whether that’s simulating the dynamics of the Greenland Ice Sheet for my PhD, developing the algorithms that drive our pricing, or the language we use when discussing a case with a client.

“Our ability to remove uncertainty and communicate flood risk and insurance solutions with precision and confidence is one of the key ways in which we have gained the trust of our partner insurers, brokers and clients.”

The idea for FloodFlash came from a project the two founders – by then working for RMS, the world’s largest risk-modelling firm – undertook for the New York Metropolitan Transport Authority to find a better insurance solution after Storm Sandy flooded the New York subway network.

“Like the millions that experience flooding every year, the MTA found it impossible to renew their cover after a catastrophic flood claim,” said Dr Bartholomew.

“We designed parametric triggers for the MTA whereby their cover would pay $200 million if water rose above a certain depth in the harbour, as it did during Sandy.”

Rimmer added: “That represented a bit of a light-bulb moment for us. Parametric insurance policies like these are typically very expensive but advances in data and tech are starting to make it a possibility for more people.

“That was the inspiration behind FloodFlash: the realisation that new applications of parametric insurance have the power to protect anyone from catastrophic flooding, regardless of their budget.”

FloodFlash, which employs 20 people and has raised £2.1 million to date, has expanded its broker network from three during an initial trial in 2018 to over 250 offices around the UK including partnerships with Aon, Gallagher, Lockton, Marsh and Willis.

“Ian and I make it no secret that UK commercial flood risk is only the first step,” said Rimmer. “I want to take FloodFlash international so that we can make a real dent in the protection gap.

“Long term, our ambition is to use the same principles of fast, tech-based insurance to protect people from other risks.”