Posted on September 7, 2020 by Jonathan Symcox 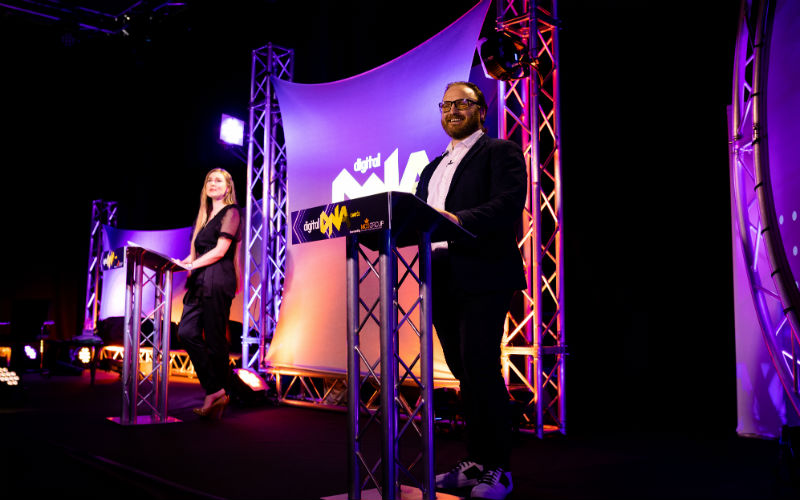 The best of the Northern Ireland tech community has been recognised through the first online edition of the Digital DNA Awards.

More than 1,000 people from around the world tuned in for the ceremony, which was originally scheduled to take place back in March.

With ongoing restrictions around large gatherings, the Digital DNA team made the decision in early August to take them online, in what has been described as a ‘uniquely different’ awards ceremony for the post-COVID-19 world.

The annual awards are regarded as the premier tech awards in Northern Ireland, recognising the success of individuals, projects and companies across 14 categories. Previous awards ceremonies have taken place from the iconic St Anne’s Cathedral in Belfast.

For 2020, the organisers created a purpose–built TV studio from where they announced the winners to an audience that included viewers from across Ireland and the UK, as well as France, Germany, Portugal, Mexico and the USA.

“The Digital DNA Awards are incredibly important for the NI Tech sector so we were determined that they went ahead in some shape or form,” said Simon Bailie, CEO of Digital DNA.

“Winning a Digital DNA Award is an important statement for many of our indigenous and international tech businesses as it provides further validation that they are best in class in their industry.

“This year may have looked different to other years; however the strength and depth of the nominees and winners has been as strong as ever and it once again proves why Northern Ireland is a leading global tech destination.”

The top accolade of the evening was the Digital DNA Company of the Year award. The highly-coveted award is decided on a combination of the judges’ votes, as well as a public vote and features the top companies from across Northern Ireland.

This year it was won by Signifyd. The San Jose–based company specialises in eCommerce fraud protection and opened its Global R&D centre in Belfast in late 2018. It now employs almost 100 people at the city centre site.

“We are absolutely delighted to have won this award, especially as the Digital DNA Awards are so highly regarded by the tech community in Northern Ireland,” said Trevor McCullough, site lead for the Belfast operation.

“To be featured in the shortlist was worthy of celebration as the tech sector in NI features some of the best tech talent in the world, but to walk away with the top prize is just incredible.

“It’s testament to all the hard work from the team in Belfast and also recognises the significant contribution they make on a global scale to our operations.”

Sean Devlin from MCS Group, the event’s headline sponsor, said: “We have been delighted to work with Digital DNA for the past number of years to bring these important awards to life and every year they keep getting bigger and better.

“2020 has been challenging for all of us so for Digital DNA to present these awards in the format they have has been incredible to watch and to be part of.

“It’s also been fantastic to see so many great companies and individuals from right across Northern Ireland recognised, each of them are helping to advance the local economy, so it is only right that we celebrate the diverse range of talent Northern Ireland has.”

Other big winners on the night included US insurance giant, Allstate, who walked away with two awards for workplace of the year and a business personality of the year award for Keith Lippert, who leads the global cyber security function from Belfast.

It was also a good day for non–Belfast based tech companies: Derry–based Elemental Software was crowned small tech company of the year while the social prescribing platform’s Leeann Monk-Özgül and Jennifer Neff also picked up the founders of the year award. Leading sports tech company and Newry based STATSports picked up a win for app of the year.

AIM-listed First Derivatives made it a double for the border city as they picked up large tech company of the year. CEO Seamus Keating said: “This award is a recognition of the dedication and expertise of our employees, and the value that our market-leading streaming analytics technology brings to our customers who operate in a range of industries across the world.

“It is also a fitting tribute to our founder, the late Brian Conlon, who would have been very proud of this moment.”

In addition to the 14 awards, the annual event also recognises the achievements of an individual who has made a significant contribution to the growth of the tech sector in Northern Ireland and who has achieved significant success on a global scale.

Danny is highly regarded and well known within the NI tech community as a Wall Street technology entrepreneur, with accomplishments ranging from leading the sale of Wombat Financial Software to NYSE Euronext for $200m aged 35 in 2008 to winning an Oscar in 2012 as a producer of The Shore.

Danny also founded the Robin Hood Project within Options in March 2020, providing direct action to support teams in COVID frontline hospitals and has helped raise over £250,000 for frontline medical staff in Belfast, London and New York.

The Digital DNA Awards 2020 were streamed on 27th August and can be viewed on-demand by visiting www.digitaldna.tech.