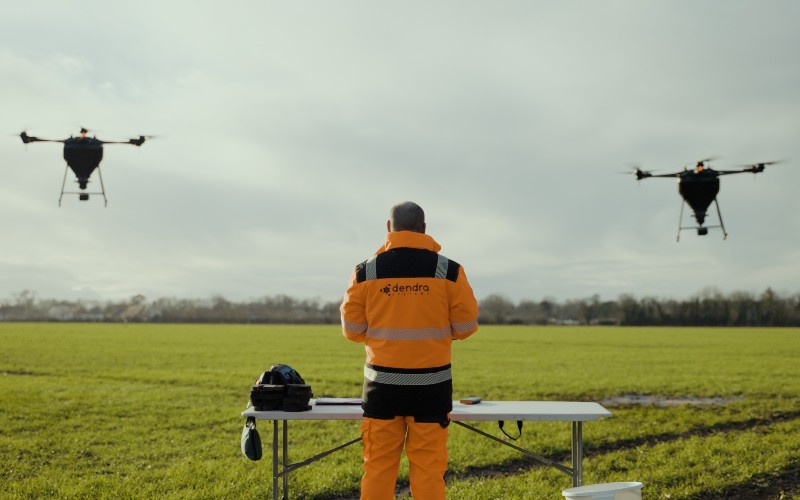 It is rehabilitating land 11 times faster and a third cheaper than traditional methods of remediation. Typically, this means it could replant up to 60 Ha per day – an area the size of 85 football pitches.

Working around the world to restore land on behalf of global natural resources companies, the EnviroTech start–up says an upgrade to its technology would enable it to accelerate the rate at which it brings back natural woodland habitats for land that has been stripped of all flora and fauna.

Using high-resolution imagery, Dendra Systems can map the equivalent of 400 football pitches a day per team and can identify 120 different species from the sky, from trees like Brigalow acacia (Acacia harpophylla) to perennial flowers like Ptilotus exaltatus (Pink Mulla mulla). Animal species identified can be as small as a lizard, up to a kangaroo.

Globally, about 25 per cent of the world’s land mass has been degraded by farming, mining, logging and other industrial processes. When land is degraded, soil carbon and nitrous oxide are released into the atmosphere, making land degradation one of the most important contributors to climate change.

Scientists recently warned that 24 billion tons of fertile soil was being lost per year, largely due to unsustainable agriculture practices. If this trend continues, 95 percent of the Earth’s land areas could become degraded by 2050.

Dendra Systems works with natural resources companies including Glencore, BHP and Rio Tinto, as well as public agencies and governments to reverse the impact of industrial processes including farming, mining and large road and rail building projects.

Using drones, Dendra’s technology helps conservation managers to see the land thousands of times more accurately than conventional satellite imagery. The AI-based technology can help to identify and map every species on every square metre, for accurate weed management and proactive stewardship.

Using ecology-driven data science, conservationists can build up an extremely detailed insight into every aspect of the land’s condition, with trends mapped so that work can be planned even more effectively.

When a full picture of the land is achieved, Dendra uses bespoke drones capable of carrying increased payloads to carry out aerial seeding. This method increases the rate at which trees can be planted, as well as dramatically reducing the on-site risks for planters.

Dendra estimates that just 10 drones flying in a swarm could plant as many as 300,000 trees per day, compared to around 2,000 trees a day using traditional methods.

“Across every industry we are learning to apply new technology including artificial intelligence and data analytics to produce better outcomes at scale,” said founder Susan Graham.

“Restoring the natural world is no different but the challenge of bringing wildlife back to our communities is huge from the labour–intensive nature of the work to the unpredictable and devastating effects of climate change.

“The natural world needs our help more than many other industries where automation and AI can be applied.

“Dendra Systems was founded to capture data about the land, turn it into insights about the ecosystem so that we can identify early risks like erosion or invasive species before they derail restoration work and then take action at scale.

“Technology, with the possibility to make exponential change to our world, is needed if we are to restore the truly staggering amount of land that has to be remediated.

“For the first time, Dendra’s Generation 3 technology will dramatically speed up and reduce the cost of the work ecologists and land managers can do.

“It allows us to map at scale with greater depth and precision, and also to seed 10 times more land with each flight.

“For hundreds of years we automated and industrialised the destruction of wildlife habitats, now we are starting to put right our mistakes on a large scale and for a much–reduced cost.”

Lucy Roberts, corporate head HSEC and human rights at Glencore, said: “Unlike common restoration projects, the specific features of the land and risks posed by working at mining sites limit both the speed and scalability of traditional restoration methods.

“Dendra helps Glencore overcome these challenges by providing unprecedented insights into the condition of the land and ecosystems using ecology-driven data science and artificial intelligence. Complemented by drone-based aerial seeding which increases the rate of planting and mitigates on-site risks. Together, Glencore and Dendra are restoring thriving ecosystems.”

Graham added: “We are asked what we can see from a drone. Well we see every blade of grass, every leaf on a tree, every piece of dirt moved by ants and we analyse every bit of it. The power of the cloud means that we are able to track plant species and track fauna, ever tail and every ear, from the female Nanking Kestrel to the bearded dragon and the red necked wallaby.”