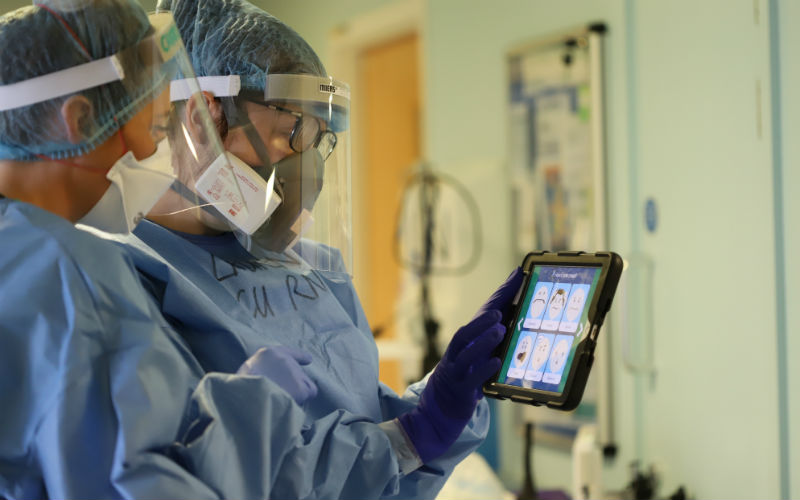 A ground-breaking new iPad app for ICU patients is transforming the experiences and wellbeing of critically ill COVID-19 patients in the intensive care unit.

myICUvoice, developed by an ICU doctor and trialled at Addenbrookes Hospital, Cambridge, is giving a voice to ICU patients unable to communicate due to needing a tracheostomy, being supported by a ventilator or weakened from being critically ill.

Research has shown that, for ICU patients, the inability to communicate is the most distressing and frustrating part of being critically ill in ICU – with over 20% of patients who survive ICU suffering with Post Traumatic Stress Disorder (PTSD), anxiety and depression after being discharged.

Dr Tim Baker developed myICUvoice after recognising the urgent need for his patients to communicate their symptoms and emotions when they were unable to speak. Ventilators prevent the vocal chords from working, and critically ill patients are often too weak to write down or mouth their messages, meaning there is often no communication at all.

Dr Baker explains: “If you are in intensive care and you can’t explain or communicate even your most basic symptoms, thoughts or needs, imagine how horrific, distressing and frustrating that must be.

“I wanted patients to be able to communicate about how they are doing and feeling, and hear their side of the story. Because if patients aren’t able to communicate openly, honestly, and deeply, we, the people treating them, are potentially missing out on symptoms. And, without having a full understanding of symptoms, we cannot provide the best care.

“By restoring communication, myICUvoice is enabling our patients to express symptoms, feelings and thoughts that the medical and nursing staff were previously oblivious to. Symptom management is crucial in critical care as it improves the long-term outcome. The earlier you can detect a problem, the better.

“But these symptoms would have been left unidentified without myICUvoice.”

The app – which was initially developed with the help of a £40,000 development grant from the hospital’s NHS charity, Addenbrooke’s Charitable Trust – features easy-to-use touch screen technology, which allows patients to tap on simple icons to respond to questions.

The interface additionally features a ‘Nurse Zone’ designed specifically for nurses, enabling them to acknowledge and address any reported symptoms as well as monitor changes in symptoms over time.

The personal communication afforded by the app has been equally beneficial.

Dr Mark Jefferys, a Specialist Registrar currently using the App with COVID-19 patients in ICU, says: “One of our patients used myICUvoice to ask about her son. It was only then that we realised she had become convinced he had died – and we were able to get him on a videocall later that day to reassure her.

“Using myICUvoice for communication has also made me realise that patients have so many symptoms I wouldn’t even have thought to ask about. So many of these are easily fixed if only we had a way of knowing about them – which we now do.”

One ICU patient who used myICUvoice whilst in the ICU described the first time he used it as “the most amazing, uplifting and motivating moment in those six and a half days of intubation”.

The patient added: “It gave me and my family an opportunity to share emotions as well as medical knowledge, and this undoubtedly had an immeasurably positive impact on my recovery out of the critical life-threatening situation I was in.”

The app is currently being translated into multiple languages so it can benefit people around the world.

Dr Baker says: “myICUvoice is actually much more than an app, it’s a data-driven platform – and, in Addenbrookes we are working to combine and analyse the data from each iPad to understand the patient experience continuously at a population level which means we can recognise previously undetected symptoms.

“myICUvoice has the potential to analyse the patient-reported data from multiple wards and hospitals, thus allowing nurses to pre-emptively treat symptoms.

“It is also starting to be developed for other indications, including for stroke and post-operative patients.”
myICUvoice iPad App is available free from the UK App store or free to download from http://www.myicuvoice.com/ or https://apps.apple.com/us/app/myicuvoice/id1465081161