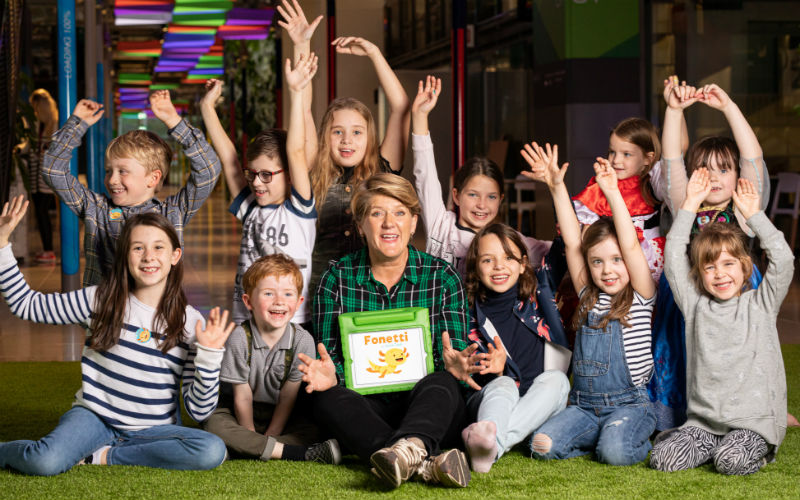 Broadcaster Clare Balding is an investor in Fonetti

Reading is crucial to a child’s development – yet one in nine kids in this country don’t own a book.

Practise at home is fundamental to improving and honing this most important of skills. However, helping a child navigate through a book in a way which benefits them may not be straightforward for many grown-ups.

“The reality is, not all parents have got the time – especially at the moment – to sit and read with their children,” Kim Antoniou, founder of Auris Tech – the company behind AI-powered reading app Fonetti – tells BusinessCloud.

“You’ve got lots of parents, and single parents, that are struggling. They are juggling working from home, paying the bills, home–schooling their kids.

“Even more importantly, many do not have the skills to do this. I know a young woman, with two young boys, who is highly dyslexic. They probably read better than she does. My daughter Victoria [who is also dyslexic] is in her late 30s and she still struggles with reading.

“Equally, parents that don’t speak English as a first language also don’t have the ability to sit and read with their children. It’s just not fair to put all of the onus on the parents without giving them tools to help them.”

Reading is crucial to learning: the impact of illiteracy or below-par literacy will be felt keenly throughout a person’s life. Yet, Antoniou (below) says, there’s another critical element which many people underestimate: reading aloud.

“It helps with confidence,” she says. “All through your life, being able to read aloud competently and comfortably is such an important life skill.” 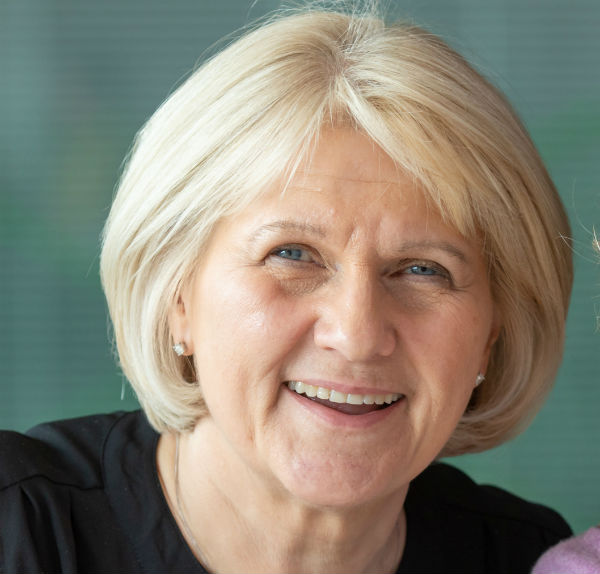 In an age where children can navigate a tablet almost as quickly as they are able to walk, harnessing technology to support the ability to read seems a no-brainer. Inspired by her then two-year-old grandson’s use of YouTube, Antoniou launched Auris in 2016 to bring fledgling voice recognition tech into the primary school learning environment.

However, she came to realise that off-the-shelf models were not sufficient for such a specific skill. “One of the things that’s fundamentally important to understand about voice technology is that there aren’t any real meaningful tools out there for children,” she says. “And when it comes to reading, that is a very, very different speech pattern to conversational speech.

Auris teamed up with Dr Peter Bell, an expert in speech technology at the University of Edinburgh and member of the Centre for Speech Technology Research, to develop a proprietary algorithm focused specifically on children reading out loud.

“After modelling our engine, we had to get the contextual data to train it – so we spent an entire year going all around the whole of the United Kingdom, recording children reading,” explain Antoniou. “We’ve got the largest repository of children’s reading voices in every UK accent on record.”

It became apparent that reading in silence would not provide optimal data. “That’s not the real world, so we conducted our data collection in school libraries and public places. We needed that background noise, the different levels of reading and errors to feed into the engine.

“The net result is that our engine has now got benchmarked accuracy of over 92%.”

The resulting app, Fonetti, features an array of books which children can access on iPads with Android tablets to follow later this year. As they read aloud, the words change colour – to green if they get it right, grey if not – and they can double-tap on any word to hear it spoken correctly.

Two of my own children spent a good half-hour reading titles, from stories about a cat which refused to go outside to a non-fiction book about wild animals. 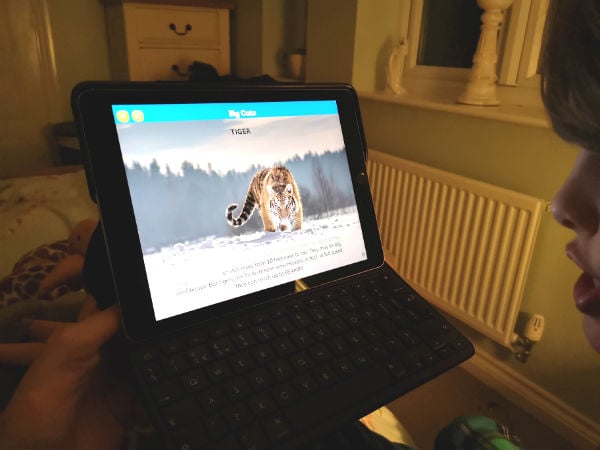 “It was really fun and I loved it. Especially the story about the boy who wanted a pet shark! I know you liked the one about tigers, Daddy. Good books,” says Charlie.

“The little creature [which pops up at the end of a story] was funny. I was happy to feed him words because he must be hungry!

“It made me feel happy. I think I’m a really good reader now. I was very proud of myself.”

The app picked up when Jack, as he is wont to do, missed a word; and also recognised when Charlie backtracked to repeat a sentence which he had not turned fully green the first time around.

It also knew to disregard the inevitable background noise, such as yelps from the baby monitor and commentary from the ‘non-reading’ brother.

“The real-time acknowledgement that Jack is getting it right tends to help children pay attention,” Antoniou says of my eight-year-old’s tendency to daydream and read superficially. “In the New Year we’re introducing comprehension, so at the end of certain books, children can answer questions about the content: what was the dog’s name? What was the colour of Jack’s hat?

“The app allows them to make mistakes, to stop and start again, and to pick up and carry on with their train of reading.

“At the end of every book, they will be presented with stars depending on how accurate they were – so they’re always striving for three stars – but also a fanfare, because it’s all about encouraging children to read more.”

The ability for children to manage this process themselves is crucial. “We get quite a lot of recognition in the dyslexia and SEN (Special Educational Needs) environments, because if you’ve got a child with dyslexia, the worst thing you can do is to ask them to read aloud in front of someone,” explains Antoniou.

“Giving them a platform to be able to practise in private, independently, and knowing that they’re receiving encouragement – with nothing negative – is so powerful for a dyslexic.

“Plus, if a highly dyslexic parent [for example] is sitting with their child as they use Fonetti, they can still be part of the process, but the parent does not have the pressure of being the one that’s doing the assessment because the app is doing it for them.”

Available on the platform is the Sadsville series of books, which were created by TV personality Martin Roberts to support the work of the NSPCC in making children aware how they can seek help when needed. 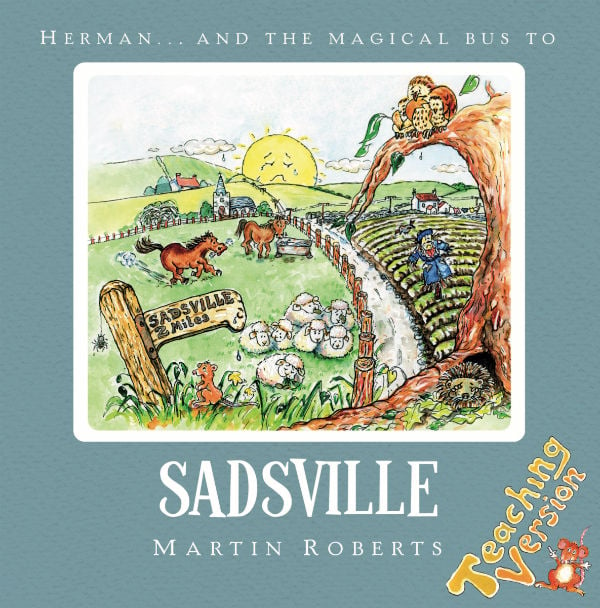 The app was one of eight selected for the government’s Hungry Little Minds educational campaign around the turn of the year, but the initiative has fallen by the wayside as a result of the coronavirus pandemic. Given the potential of these apps to support home learning, Antoniou says the government has “dropped the ball” in allowing it to fade into the background.

TV presenter Clare Balding is a brand ambassador and investor in Fonetti. She is leading a ‘12 Days of Christmas’ campaign which will see a dozen celebrities read a story from the Fonetti library from Christmas Day for 12 days.

“It’s such a simple concept and a brilliant use of technology to support children, make them feel more confident and allow parents to monitor their progress,” says Balding. “It recognises the individuality of children’s intonation and regional accents. It is helpful and supportive of hesitant delivery or speech impediments and will be an endlessly patient and non-judgmental friend to nervous readers, encouraging them to be more confident and braver.

“I have always wanted to be involved with an idea that could change the world and I believe Fonetti is the one.”

The ultimate aim is to get half a million children using the platform, which operates a subscription model, in 2021. “We’re just launching in schools now. We’ll be working in 20 schools by the end of the year for our beta programme, and then we’re launching properly into schools in the New Year,” says Antoniou, who made the platform available for free during the two COVID-19 lockdowns. “Our plan is to have 2,500 schools by this time next year.”

Personal logins can be linked to the school’s account, giving the child access to the library of books. This allows schools to track when and what their pupils are reading, their accuracy and when to move them on to a higher level of books. 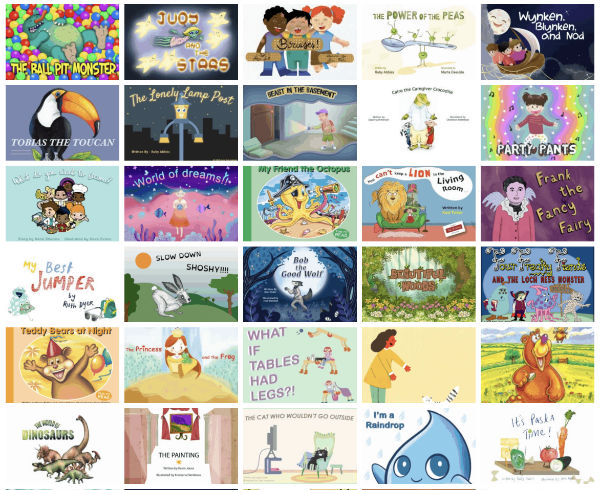 The high quality of data has opened up an additional unexpected revenue opportunity. “We’ve got conversations on the go with several major publishers,” reveals Antoniou. “We can tell them how many books have sold; whether those books have actually been read; and the places where people stop reading and become disengaged.”

Among the first of these ‘premium’ titles which can be purchased inside the app are the books of Enid Blyton.

There are also plans to extend the technology to assist the recovery of stroke patients and to help people in global markets to learn English. However, the original vision holds true for Antoniou, who plans to raise a Series A round of investment next year.

“One of the most powerful things [when things don’t go as smoothly as you expected] is when I see children using the platform – and I remember why we’re doing this,” she says. “When we’ve asked children how using Fonetti makes them feel, several told us ‘it makes me feel brave’. Imagine that.

“My whole team has been incredible throughout the pandemic. They’ve all put blood sweat and tears into what we’re doing because they feel that there’s a purpose.”