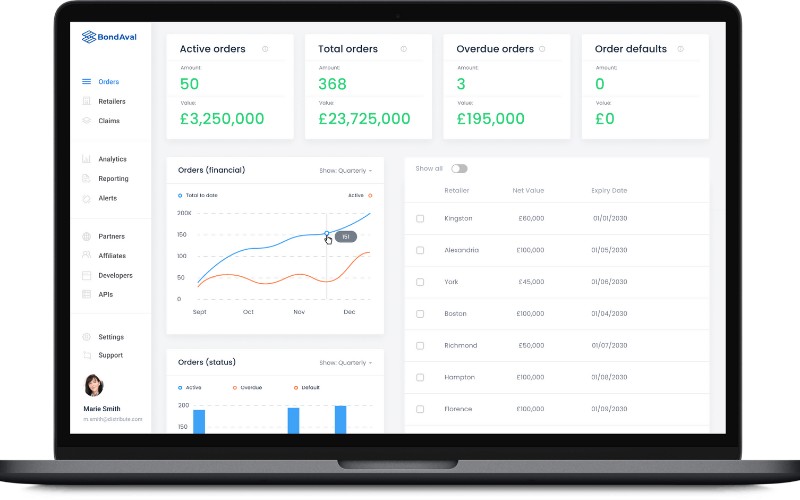 BondAval says it offers a faster, more efficient and more flexible option to the traditional credit security through its credit risk engine.

It is now hiring for operations in UK, US and Spain after securing backing from lead investor Insurtech Gateway alongside True Sight Partners and prominent angel investors such as Carlos Gonzalez-Cadenas – formerly COO of GoCardless, now partner at Index Ventures – Yi Luo (Greensill), Chris Adelsbach, Will Neale and Charlie Songhurst.

BondAval’s credit risk engine enables the instantaneous issuance of MicroBonds, which provide investment-grade certainty to wholesalers when securing their stock and inventory.

Founded early last year by Sam Damoussi and Tom Powell – a former England Rugby Sevens captain with 43 caps, including a World Cup runners-up medal, who also represented Harlequins and Northampton Saints – it has brought in key executives such as head of product Arthur Leung, formerly of 11FS and Curve.

“The gulf between corporates and independent retailers trying to secure credit terms is vast and, in our opinion, unfair,” said Powell.

“Our vision at BondAval is to redress this balance, allowing independent retailers to leverage investment grade security. Their word – our bond.

“To achieve this vision, we are excited to partner with our new investor shareholders, led by Insurtech Gateway. They understand the value we can bring by applying digital first propositions to the world of B2B insurance.”

Damoussi continued: “Independent retailers are competing on an uneven playing field when it comes to credit terms. We also see a huge delta in the user experience between the B2B and B2C insurance sectors.

“By leveraging technology and the founding principles of insurance we can level that playing field and vastly improve the user experience. We look forward to growing our team and raising the bar across the industry in order to deliver on our plans for the next year.”